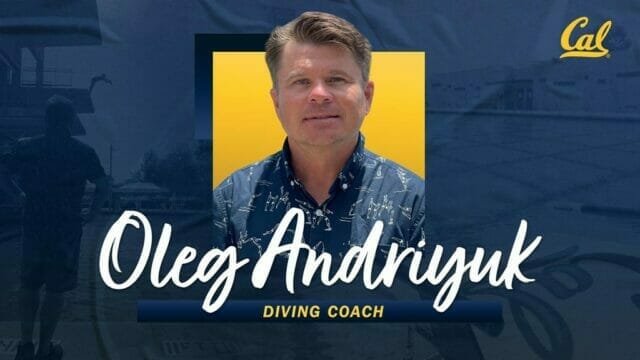 Cal diving coach Oleg Andriyuk has resigned due to health reasons, a spokesperson for the Cal swimming & diving team told SwimSwam on Tuesday.

Andriyuk was hired as the program’s new coach in July, where he was hoped to inject new life into the Cal diving program.

Andriyuk did not respond to a request for elaboration on the health issues Wednesday morning. He did spend last week at the University of Arizona as part of the coaching staff at the Junior Pan American Diving Championships. There he accompanied several of his divers, including his son, Misha, who paired with Tyler Wills to win silver in the Synchronized Boys Platform event.

Jaiden Lynch, who he also coached as a visiting coach with the Mission Viejo Nadadores since September 2020. Lynch earned a silver medal in the girls’ 16-18 platform.

Andriyuk didn’t have any prior NCAA D1 collegiate stops on his resume, but he does have stops at two diving clubs associated with Pac-12 programs. Prior to 12 years at the Stanford Diving Club, including a decade as head coach, he spent 9 years as a coach with the Trojan Dive Club in Southern California.

While the swimming programs at Cal are administered separately, the two share a diving coach. Since 2009, the men’s and women’s teams at Cal have each won 4 NCAA team titles, with the most recent being the men’s 2019 championship.

But throughout those runs, neither team has been able to sustain a substantial national diving presence.

The Cal women scored 125 diving points at the 2021 Pac-12 Championships. That was the fewest of the 6 conference schools that sponsor diving (Washington State does not have a diving program).

The Cal men only entered 1 diver in the Pac-12 Championships, Tyler Wesson, scoring 22 points – also lowest in the conference.

And yet both teams won Pac-12 titles, even with the diving deficit.

The Stanford Diving Club had a #1 national ranking in 2018, and Andriyuk received the Moose Moss Age Group Award, given annually to the most outstanding age-group diving coach in the nation. He also earned the Dick Wilson Memorial Award, which recognizes the most-improved age-group club in the country.

Among his international assignments include as a Team USA assistant at the Rio 2016 Olympic Games, where he helped Kristian Ipsen earn the United States’ first top-five finish in the men’s 3-meter event in 16 years. He was also on US staffs at the 2016 FINA World Cup, 2015 FINA World Championships, and 2014 FINA Junior World Championships.

At the 2021 NCAA Men’s Swimming & Diving Championship meet, Texas won by 27 points ahead of Cal. While Cal’s swimmers scored more than Texas’ swimmers, Texas’ divers scored 83 points – more-than-enough to close that gap and give the Longhorns the team title. Because divers count as only a part of a roster spot at the NCAA Championships, teams with multiple qualified divers can take more athletes to the meet than teams without divers – with the Texas and Cal men being the only teams for whom that is consistently a factor.

The Texas Longhorns, besides their success in swimming, have the best diving program in the country, which has contributed heavily to their dynasty that has won 4 of the last 5 NCAA Championships.

Cal’s first meet of the 2021-2022 season, the King and Queen of the Pool events, did not include diving. They’re scheduled to compete at home against Virginia on Friday, which should be the team’s diving debut for the season.