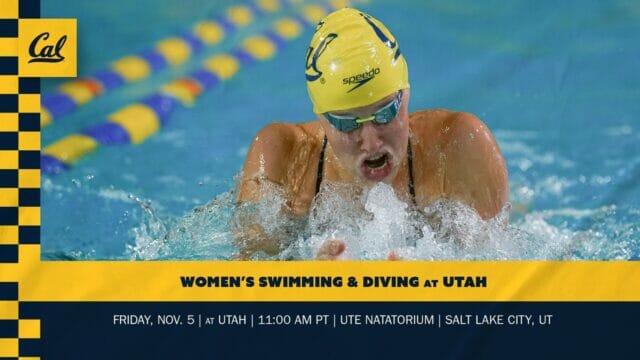 Cal takes to the road for the third time in four competitions this fall, traveling to Utah on Friday for a dual meet with the Utes. Racing will get underway at 11 am PT. The Golden Bears are making the trip to Salt Lake City for the first time since October 2017, with fifth-year senior Robin Neumann the lone Cal holdover from the meet. As a freshman, she took second in the 200 free and third in the 200 back, as the Bears rolled to a 186-114 win.

Stadden is coming off a freshman season in which she placed in the top 5 at the NCAA Championships in both the 100-yard back (5th) and 200-yard back (3rd) and captured the Pac-12 200 back title. She later finished fifth in the 100-meter back and fourth in the 200-meter back at the U.S. Olympic Trials in June.

TERI McKEEVER RECEIVES PARAGON AWARD: Cal head coach Teri McKeever received the Paragon Award from the International Swimming Hall of Fame earlier this fall for her outstanding service and contributions towards advancing competitive swimming last weekend. Now in her 30th season leading the Golden Bears, McKeever is one of the most accomplished coaches in the sport, having guided Cal to five Pac-12 and four NCAA team titles, including 15 consecutive top-5 finishes at the national championships. She also served as head women’s U.S. Olympic coach in 2012 and has been on the Olympic staff multiple times, including this past summer in Tokyo.

NATALIE COUGHLIN EARNS BASHOF HONOR: Natalie Coughlin, a 12-time Olympic medalist, 20-time World Championships medalist and former world-record holder, was inducted into the Bay Area Sports Hall of Fame on Oct. 3. The three-time collegiate swimmer of the year for the Bears from 2001-03 is the third Cal women’s swimmer to join the BASHOF, with the others being Ann Curtis Cuneo (1983) and Mary T. Meagher (2002).