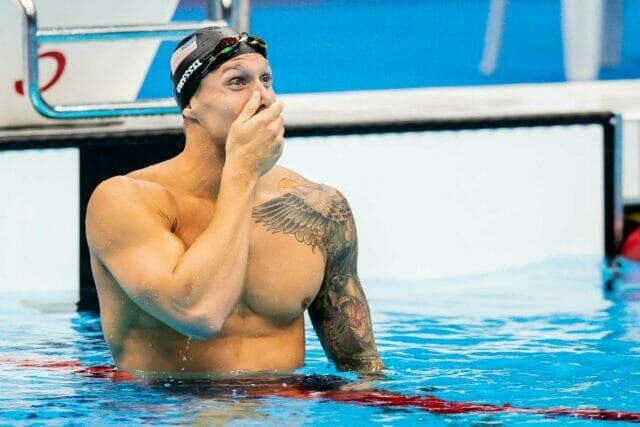 Olympic gold medalist Caeleb Dressel has returned to analyze his fastest and most high-profile races in the Dressel Dissect video series on his YouTube channel. On Friday, Dressel released a video analysis of the men’s 100 freestyle final from the 2020 Tokyo Olympic Games. Dressel won the race in a new Olympic Record time of 47.02, just 0.06 ahead of Australian Kyle Chalmers, the 2016 gold medalist in the 100 freestyle.

Though Dressel swam the second-fastest time of his career, falling just short of the 46.96 American Record he produced at the 2019 World Championships, he nonetheless spots issues with his technique and identifies aspects of the race that could have been better.

“What is this? What is this? Boom. Take an extra stroke and I think I breathed the last stroke into the wall as well. Yeah, look, there’s my breath, head way too long waiting on the side…”
“I’ve always said this: if you want to know how to swim the 100 free, swim it like Kyle (Chalmers).”
“That’s the earliest I’ve ever put my head down for any race and I felt it. Tempo was a little high and you can tell I’m hurting, but I knew where everyone was at with the field…”
“That was my race plan going into this, this wasn’t just like, ‘Oh, I feel someone coming, let me do something I’ve never done before.’ I knew that’s what I was going to do in this race, I knew that’s what it was going to take to get my hand on the wall first…”
“I think if I was six one-hundredths slower off the blocks we (Dressel and Chalmers) would have tied.”
“Being in the race is what I absolutely love, it’s so fun watching everything you’ve done in practice come forward.”
“I didn’t feel like I was ‘the guy’ in this race, it was almost more comforting knowing I was about to get into a dog fight. I think a lot of races are like that for me, I don’t particularly like being, you know, ‘the favorite,’ screw favorites, it’s so dumb, honestly.”

Dressel gets started right away with an analysis of his start and breakout stroke, both of which he thought were pretty good.

“I thought I had a pretty good start… [and] I thought I absolutely nailed my breakout… if you look, like, I thought I hit this breakout perfect. You guys heard me say like a million times on here, like, I wanted to be about a foot under the water when I’m actually doing the breakout and I thought right here was perfect in the transition with my legs, I’m actually fine with this breakout and the actual start itself, I thought it was clean getting in so I set myself up great. I’ve got about half a body-length, super-demanding event, [the] 100 free, I think it’s one of the hardest 100-meter races, so setting myself up with a good, a good clean entry and then using the momentum going forward, and then… let me go to where I actually settle into my groove a little bit,” says Dressel

Dressel continues, saying, “So I was happy the first, like, 35 [meters] of this race, I settled into my groove fine, my arms look relaxed, the left arm’s swinging a bit more than I want; I think the hand placement is good and this is where (near 35 meters) I get a little bobby. So you’ll see leading into this wall I think I got a little choppy, probably a little too excited, and let’s witness the worst turn in the sport of swimming. So again, right here, getting just a little choppy, and this is not the fastest I’ve took it out and I think as you’re about to see the reason why: so if you watch I have, if I take one more stroke it’s perfect, it’s going to be a perfect turn, I’ll probably be out, I think I was out 22.3 here, the fastest I’ve been out is 22.2, I think I would have been out around 22.2 if I just take an extra stroke,” says Dressel.

Dressel recalls his splits very well, though for those who are curious as to the exact splits, here they are–and Chalmers’ too, because, if you’ve read this far, you probably want to know his as well:

“What is this? What is this? Boom. Take an extra stroke and I think I breathed the last stroke into the wall as well. Yeah, look, there’s my breath, head way too long waiting on the side… going out I thought my head position was great, super low, and then it got a little bobby.”

Despite having imperfect timing, Dressel states that he believes the actual turn and his kicks off the wall were pretty good.

Following his signature six dolphin kicks underwater off of each wall, Dressel comments that his breakout stroke on the second 50 was not as good as the first breakout stroke following the start.

“This [breakout] was not as smooth as the first one. See what I’m talking about… I thought I popped up just a little too much… honestly, like half my upper body’s already out of the water… [and] see how late I brought the legs in? There’s too much of a pause in that last underwater [transitioning into] the flutter [kick],” comments Dressel.

As Dressel gets into his stroke he comments that his rhythm looks alright, though a little choppy still.

“I think I settled into a decent rhythm here, I think I’m just a little choppy but it looks smooth out front where my hands are. Right in here I think I did a good job of controlling that but I just think just a little too much [bobbing].”

“I’ve always said this: if you want to know how to swim the 100 free, swim it like Kyle. So Kolesnikov is probably about a little less than half a body-length [behind], and Kyle, I think it’s because of the camera angle, it’s hard to tell, but Kyle’s closed the gap already I would say.”

“That’s the earliest I’ve ever put my head down for any race and I felt it. Tempo was a little high and you can tell I’m hurting, but I knew where everyone was at with the field, so I’m gonna pause it to talk about that last part: I could see Kyle, I could see the white water from Kyle, I knew where Kolesnikov was, that’s really the only way I could see looking because I was breathing that way, as Rowdy would say, I could see him because I’m breathing,” said Dressel.

“That was my race plan going into this, this wasn’t just like, ‘Oh, I feel someone coming, let me do something I’ve never done before,’ continues Dressel. “I knew that’s what I was going to do in this race, I knew that’s what it was going to take to get my hand on the wall first, and remember, this race was six one-hundredths [between first and second]. And it’s funny, so (coach Gregg) Troy’s always been adamant about getting off the blocks, reaction time six one-hundredths is what separated me and Kyle in this race, he swam a great race, super fun race with Kyle, I have so much respect for the guy, I feel like we bring out the best in each other, so you’ll never hear me talking heat on anybody, especially not Kyle.”

Dressel expands on his race strategy by including an analysis of his reaction time off the blocks.

Dressel was, in fact, off the blocks in 0.60 versus Chalmers’ 0.66 reaction time. As for the race as a whole, Dressel remarks that it hurt, but that no race has ever hurt worse than a swim practice.

“I’ve never had a race hurt worse than a practice, I know how to hurt in practice, and I think that’s where it shows up in the races. You know, the more and more you practice this stuff… it comes up on the big stage. It’s fascinating and it’s humbling to see the stuff actually, you know, come forward like that,” says Dressel.

Dressel points out that the top-three finishers in every final of the Tokyo Olympic Games were recognized with lights that would ignite on their blocks upon finishing a race, though Dressel made sure to look at the lights on his block carefully, as well as the blocks around him and the scoreboard, before celebrating.

“The [top]-three finishers have lights on their blocks, and I knew that going into it so I think the first thing I saw was my block was lit up, so I was like, ‘Okay, I made a medal,’ and I saw it was one light, and then I think at that point, so I turned around, I wanted to triple-check to make sure I wasn’t about to celebrate for no reason. So this is when it’s really hitting because I could hear the USA people in the stands, and at this point, I hate to admit it, it wasn’t even, I was happy, but the first emotion I felt was relief. You have to think, this was a two-year build-up of being ‘the guy,’ I put a lot of pressure on myself, I knew what I was capable of doing, [the] spotlight and pressure [from] other people, you know, I’d hate to say that I don’t feel it, but I do. I think I do a good job of handling it, but when I’m in the water I don’t think about any of that stuff,” says Dressel.

Dressel finishes the video by talking about the joy he feels while racing and how gratifying it is to see hard work in practice pay off when it matters most.

“I remember every race I’ve ever swum, and like going back to when I was like 12, I have such a vivid memory through my own eyes of what was going on where everybody was, and that’s the really special part about this sport.”

“Being in the race is what I absolutely love, it’s so fun watching everything you’ve done in practice come forward.”

“I knew if I set myself up correctly the rest of the Games would be ‘easier.’ I hate using that word but I knew I could use that momentum of having that weight off my shoulders to move into the other relays, my other individual events knowing that I got my first individual, and it does hit different, there’s not three other guys who are the best in America on a relay with you to bail you out, so it was really special.”

“I didn’t feel like I was ‘the guy’ in this race, it was almost more comforting knowing I was about to get into a dog fight. I think a lot of races are like that for me, I don’t particularly like being, you know, ‘the favorite,’ screw favorites, it’s so dumb, honestly. Like, I think I was more nervous for the fly, honestly, and that was a really fun race with Kristof (Milak), but for some reason this 100 free, I didn’t want to take this moment for granted knowing I was swimming, you know, in contention for a gold medal–how exciting is that? I don’t want to let those little things just slip by.”