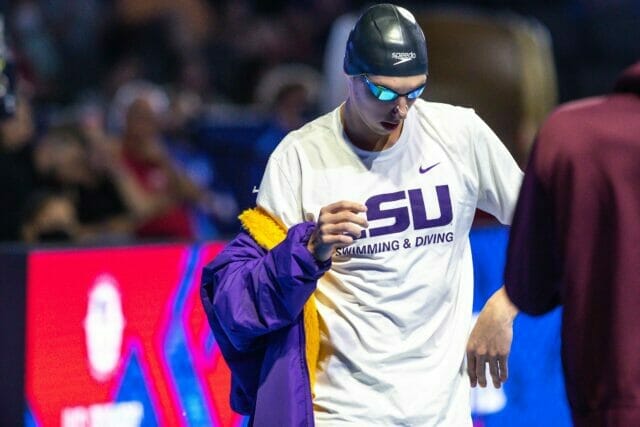 LSU hosted Grand Canyon for their first dual meet of the season, sweeping the Antelopes in decisive fashion. The meet came at the end of a bumpy last week and a half for the Tigers, as the program is still experiencing the growing pains that come with a major staff change. New head coach Rick Bishop has notched his first win with the program, and his team swam well overall.

Sprint star Brooks Curry was in top form at his first meet since his primary coach, Steve Mellor, left the program last week. Curry clocked a 19.51 in the 50 free to win the event handily, and break the LSU pool record. It was a great early October showing for Curry, whose best is 18.97 from last year’s SEC Championships. He also went on to win the men’s 100 free in 44.27, another solid October showing for the 41.77 100 freestyler. Curry was just as good on the relays, anchoring the 200 medley relay in 19.16, and anchoring the 400 free relay in 42.99.

LSU’s Mitch Mason only swam two races today, the men’s 200 medley relay, and the 100 breast, but the sophomore exceled in both races. In the the 200 medley, Mason posted a 25.00 breast split, which led the field of breaststrokers. He then clocked a 54.97 in the 100 breast, to win the event by over a second. Mason has a personal best of 52.32 in the 100 breast, which he swam at SECs last year as a freshman.

Junior Katarina Milutinovich also got out to a great start today, winning both her individual events. She kicked things off in the women’s 200 free, easily outpacing the rest of the field, swimming to a 1:48.43. The time was just 2.67 seconds off her personal best, and it was good to win the race by 5.45 seconds today. She then went on to win the women’s 100 free, clocking a 49.93. This was another race where Milutinovich was very close to her lifetime best, which sits at 48.84.

Earlier this week, we reported that LSU junior Summer Stanfield had entered the transfer portal. The timing of her entrance into the portal seemed to indicate it was related to Mellor’s resignation, though we don’t know for sure. The 2021 NCAAs qualifier was absent from today’s meet.

BATON ROUGE, La. – The LSU swimming and diving team returned to the pool and diving well for the first regular-season meet against Grand Canyon. The men won 194-106, while the women defeated the Antelopes 230-70.

LSU welcomed back fans to the Natatorium for the first time since the COVID-19 pandemic first hit in March 2020.

The Tigers took the pool with a strong first outing against an opponent, not in the purple and gold. LSU began the meet with an impressive start as the men and women both won the 200-yard medley relay. The women’s ‘A’ and ‘B’ relay teams finished in first and second, respectively. The men also took first place in the first official event of the season.

“Spencer Adrian summed it up best,” head swimming coach Rick Bishop said. “It’s a great day to be a Tiger. The energy, the enthusiasm – we had so much fun. Grand Canyon was such a great competitor. They brought their best, and they made us swim at our best. We’re having some great swims at this point in the season. We’re moving forward, they’re learning, they’re getting better. We’re set up for a great season.”

LSU won 23 swimming events during the meet, which was highlighted by 2020 Tokyo Olympian Brooks Curry, who broke the pool record in the 50-yard free with a time of 19.51.

Head Diving Coach Doug Shaffer said his athletes still have much room for improvement, but he was proud to see the enthusiasm and passion for the sport shine through.

“At the end of the day, it’s Oct. 9,” Shaffer said. “Our overall performances were solid, some really good stuff. Some stuff that is reflective of the fact it’s Oct. 9. We’re still working on fundamentals and strength and conditioning. From a spirit and teamwork and camaraderie perspective, I couldn’t be happier, as we’re looking through challenges, changes, and developments looking ahead.”

Sophomore Montserrat Gutierrez Lavenant, 2021 Female Diver of the Year recipient showed off her strength on the boards finishing the day with two first-place finishes. She scored a 301.50 in the one-meter dive and a 298.73 in the three-meter dive. Freshman Maggie Buckley showed out during her first dual meet of her LSU career finishing in second place behind Gutierrez Lavenant on the one-meter and three-meter scoring a 301.05 and a 279.00.

The Tigers head out west to the Cadet Natatorium at the Air Force Academy in Colorado Springs, Colorado. The meet will last two days from Oct. 22 to Oct. 23. Friday’s portion of the competition will begin at 6 p.m. CT/ 5 p.m. MT. The Saturday portion will start at 11 a.m. CT/ 10 a.m. MT.

Grand Canyon’s swimming and diving teams fell, 474-126, to LSU in the season opener on Saturday morning at LSU Natatorium. The Lopes saw tough competition against the Tigers but are optimistic about the results.

Junior Mikhail Lyubavskiy won the men’s 500 freestyle with a dominant time of 4:36.79. Adrian Curbelo Tejera also earned a win in the men’s 100 butterfly by an arm’s length. He finished with a time of 49.59.

Sophomore transfer Jack Armstrong finished seconds behind LSU’s 2020 Tokyo Olympian Brooks Curry in the 50 freestyle with a time of 20.19.

For the women, senior Emily Muteti won the 50 freestyle with a time of 23.69 gliding past her opponents. Muteti also earned a third-place finish in the 100 butterfly with a time of 56.67.

Freshman Briana Rittenback took second in the 50 backstroke seconds behind Aleksandra Wegrzynowska also saw a top-three finish in the 200 freestyle with a time of 1:54.79.

Sophomore divers Lizzy McKnight and Isaac Poole took home third place finishes in the 1-meter event. McKnight earned a total of 273.15 points with and Poole finished with a total of 283.58 points.

Sophomore Nicholas Gunn saw a third-place finish in the 3-meter event with a total score of 271.35 points.

To end the meet, the Lopes’ saw two second-place finishes in the 400 freestyle relays. The men’s race was tight with the Lopes in the lead until Curry comes back to lead the Tigers to a finish.