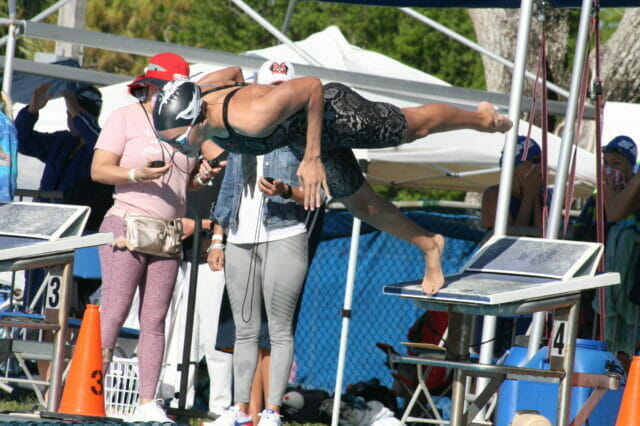 The Bolles School dynasty continued on Saturday as the Bulldogs won the FHSAA Class 1A State titles in decisive fashion, continuing a tradition of excellence that’s been going on for over 30 years. The Bolles School boys have won every FHSAA championship they’ve competed in since 1988, while the girls have gone undefeated since 1991.

The Bolles girls won four events, including two relays, to place first in the standings with 370 points, 132 clear of runner-up Saint Andrew’s (238).

Meyers-Labenz would later team up with Megan McGrath, Sabrina Lyn and Manita Sathianchokwisan to win the 200 free relay in a time of 1:32.68, with Sathianchokwisan putting up a noteworthy 22.30 anchor split.

South Florida Heat sophomore Erika Pelaez soared to a new State Record in the girls’ 100 backstroke, finishing in a time of 52.34 to erase Clara Smiddy‘s 2013 mark of 52.46. Smiddy was also a former member of SFH.

Pelaez finished her standout meet by leading off the South Florida Heat 400 free relay in 49.03, under the individual 100 free winning time.

The Bolles boys won by a whopping 399.5-point margin, putting 574 on the board. The King’s Academy won a tight battle for second over Saint Andrew’s and the South Florida Heat.

Bolles won eight of the 11 swimming events on the schedule, including a relay sweep and a pair of doubles turned in by Andres Dupont Cabrera and Miguel Rojas Newman.

Dupont Cabrera, Heck, Peterson and Ethan Maloney also split 20-low in the Bulldogs 200 free relay win, posting an elite time of 1:20.30, with Dupont Cabrera leading off in a scintillating 20.07—a time that would’ve won the individual 50 free.

In the 400 free relay, Bolles rolled to another big win in 2:58.10, with Dupont Cabrera again producing the top split at 43.49 swimming third.

Also winning for Bolles was Heck, who first set a new State Record in the 100 breast prelims at 53.64. He followed up by winning the final in 53.95.