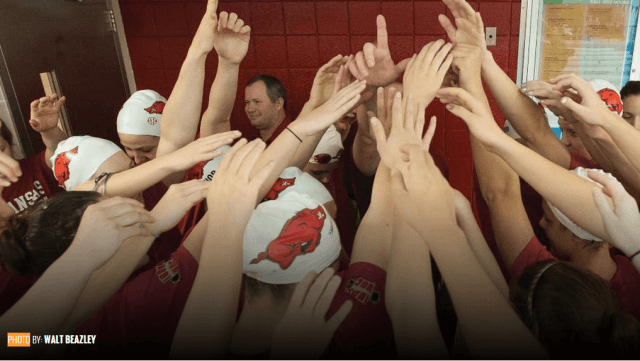 The Arkansas Aqua Hogs defeated both Vanderbilt and Drury on Saturday, continuing their 100% win streak against both teams since 1997.

The Razorbacks dominated despite having only 23 women on their roster this season, compared to 29 the previous season. Between the 2020-21 and 2021-22 season, at least 12 Arkansas women transferred out of the program, including one recruit switching her commitment.

Melton’s wins came off of a successful previous season, where she competed in Wave I of Olympic Trials and placed eighth in both the 50 freestyle and 100 backstroke at the 2021 SEC Championships. Though she typically sticks to the sprint events, Melton’s 200 backstroke at the tri-meet was actually the slowest of her college career. In comparison, she swam her best college 200 backstroke in 2018 (2:01.56), at an Arkansas, Kentucky, and Missouri tri-meet.

Fellow teammate and Trials qualifier Vanessa Herrmann secured the breaststroke event wins for the Razorbacks. Her time of 1:01.85 in the 100 breaststroke, just about two seconds off her sixth-place winning time of 59.95 at the SEC Championships. She also swam the first-place 200 breaststroke time of 2:17.46.

Rounding out the multiple individual-event winners for the Razorbacks is junior Adela Vavrinova, who won the 200 freestyle with a time of 1:51.18. She also showcased her versatility by winning the 100 IM, with a time of 57.50.

Even with Arkansas’ major success, Vanderbilt and Drury still snuck in some wins. Dury senior Allison Weber won the 1000 freestyle by 17 seconds, with a time of 10:24.85. She had previously broken the GLVC record in the 1650 freestyle, back in the 2018-19 season. She slipped to third in the 500 freestyle, behind teammate Bec Cross and Vandy freshman Mercedes Traba.

Traba is a two-time Junior National qualifier and finalist, and a four-time state finalist from Florida.

Vanderbilt will get another boost in the spring, when former Arizona Wildcat Faith Knelson joins the team. Knelson has competed for Team Canada at meets like the 2017 World Junior Championships and 2019 Pan American Games, though earlier this year she took a medical redshirt for the remainder of last season due to a spinal injury.