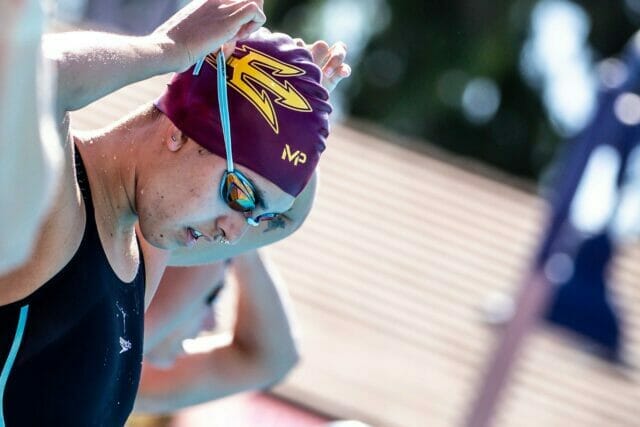 One day after a historic victory over the Arizona Wildcats, the Washington State women welcomed Arizona’s other Pac-12 program, Arizona State, to Pullman for a dual meet. The Cougars raced hard but couldn’t repeat the prior day’s magic, falling to the Sun Devils 157 to 105. The meet also served as Arizona State’s first dual since February 2020 after redshirting their entire roster for the 2020-21 season.

Leading the way for the Sun Devils were double winners Emma Nordin and Jade Foelske. Nordin, a Carmel, Indiana native who is one of the top returning distance freestylers in the country, flexed her distance prowess by sweeping both the 1000 and 500 frees. In the 1000, Nordin cruised to an even-split, 12 second victory in 10:16.71. She later returned to win the 500 in 5:02.82, touching four seconds ahead of Washington State freshman Noelle Harvey.

Also winning two events on the day was redshirt sophomore Jade Foelske, who swept both fly events for Arizona State. The 2020 NCAA qualifier from Brookhaven, Georgia started off her day by winning her signature 200 fly in 2:00.38, just out touching teammate Linday Looney for the win. Foelske later returned to take the 100 fly in 55.15, again touching ahead of the 2nd place Looney.

Washington State was led by star sprinter Chloe Larson, who dominated the 50 free in 23.37 to take the win by 8 tenths. Larson was a breakout star last year for the Cougars, winning the program’s first-ever Pac-12 title in the 50 free. She continued her strong performance into the summer when she qualified for the semi-finals in the 50 at US Olympic Trials.

In the 100 free it was another Cougar, however, who took the victory. Angela Di Palo, a freshman from Italy, touched first in 51.44, just narrowly ahead of ASU’s Erica Laning and Larson. Di Palo and Larson would team up later with Hailey Grotte and Paige Gardner to win the 200 free relay in 1:34.74.