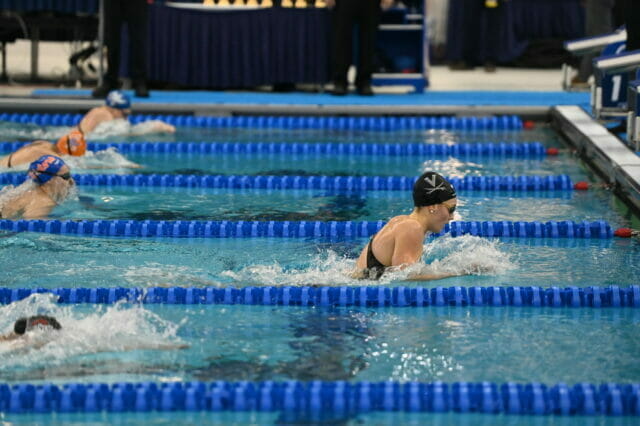 Alex Walsh, a sophomore at Virginia, broke the ACC record in the 400 IM Friday at the Tennessee Invite with a time of 4:01.40.

The previous record was held by teammate Ella Nelson, who swam 4:02.33 at last season’s NCAA championships. Nelson also swam in Friday night’s race, where she placed second with a time of 4:02.19.

Walsh was slightly faster than Nelson in the back and free part of the event, but Nelson swam a faster breaststroke split.

Walsh’s time at the Tennessee Invite is also faster than the time that won the 400 IM at NCAA Championships last season, Brooke Forde’s 4:01.57. Forde also swam the event on Friday night at the NC State Invite, where she swam 4:03.72 in finals, placing first.

Last season, Walsh was the NCAA champion in the 200 IM, with a time of 1:51.87. She also participated this summer in the Tokyo Olympics, where she won the silver medal in the 200 IM.

Walsh’s time makes her the fourteenth-fastest 400 IMer ever in the NCAA, and her time is the fastest in the NCAA as of Friday night. The top 400 IM ever belongs to Ella Eastin, who swam a 3:54.60 for Stanford in 2018, but the only swimmers still in college who have ever posted a faster time than Walsh is Stanford graduate student Forde and USC graduate transfer Calypso Sheridan. Forde’s best time is 3:59.26, and Sheridan’s best time in the event is 4:01.35.