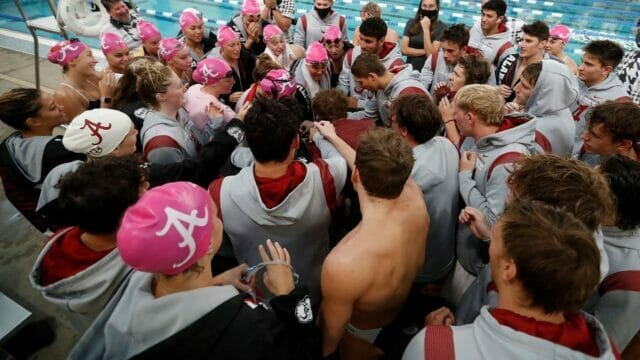 The LSU Tigers hit the road this weekend to take on SEC foes, the Alabama Crimson Tide, in what was the first SEC action for each team this season. Notably, these two teams are both under new head coaches this year, with Rick Bishop having taken over LSU, and Margo Geer moving up from volunteer assistant to head coach at Alabama.

The Crimson Tide came in at #8 (women) and #14 (men), in our first round of power rankings, while the LSU women were unranked and we had the men at #21. While those rankings are primarily focused on NCAA potential, that ordering still held true for this dual meet, as Alabama defeated LSU in both the men’s and women’s competitions.

White also doubled, sweeping the backstrokes with times of 53.27 and 1:55.68. That 200 time put her at #7 in the nation so far this season. White finished 2nd in both backstroke events at last year’s NCAA championships.

Louisiana State’s strength was on display in the diving events, where Montserrat Lavenant won the 1m with a score of 293.63 and Helle Tuxen won the 3m with a 346.43

The Tigers’ lone swimming win came from Hannah Bellina, who held off McMahon in the 200 fly to win in 2:00.04. Katarina Milutinovich came close to winning twice, finishing just behind Dupre in the 200 free with a 1:48.65 and touching after Antoniou in the 100 free, with a 50.30.

LSU’s Brooks Curry was the big star on the men’s side, but Alabama’s depth prevailed, as they won by a 40-point margin.

Curry, another US Olympian, got things moving early on, as he rocked a 1:34.27 in the 200 free, a time which puts him at #2 in the nation so far this season, and only 0.11s behind Michigan’s Jake Mitchell.

That appears to be Curry’s fastest 200 free time outside of a championship meet, and he swam 1:35.86 at this same meet almost exactly a year ago, before ultimately placing 6th at NCAAs in the event.

Alabama also got a triple, courtesy of Matthew Menke. After leading off Alabama’s 200 medley relay in 21.91, he swept the backstrokes with times of 47.68 and 1:46.28. He then wrapped up his day with a 1:48.72 victory in the 200 IM, defeating teammate Nicholas Perera by nearly two seconds.

Despite Curry’s split, Alabama closed out the night with a win in the 400 free relay. Jonathan Berneburg led the Crimson Tide with a 43.72 split, en route to a 2:57.25 victory.

TUSCALOOSA, Ala. – Alabama swimming and diving picked up decisive wins over the LSU Tigers Friday afternoon at the Alabama Aquatic Center in the Crimson Tide’s Southeastern Conference opener. The UA women downed the Tigers 194.5-105.5, while the men came out on top 170-130.

“I was really pleased with the way we competed today. This was our toughest opponent of the season and we rose to the challenge in a lot of spots, bringing a lot of good energy at our home pool. We still have a lot of work to do as we continue to prepare for our mid-season invitational, but today was a step in the right direction.”

Following its meet with LSU, Alabama hits the road for its mid-season invitational in Knoxville, Tenn., competing at the Tennessee Invitational Nov. 18-20

TUSCALOOSA, Ala. – The LSU swimming and diving returned to action Friday at the Alabama Aquatic Center to take on the Crimson Tide in the first SEC dual meet of the season. The men fell by a score of 170-130, while the women lost 194.5-105.5.

On the three-meter, Helle took the top spot with a score of 346.43, and her sister, Anne, finished behind her with a score of 314.48. Rounding out the top four were Gutierrez Lavenant and Buckley finishing with respective scores of 309.30 and 287.55.