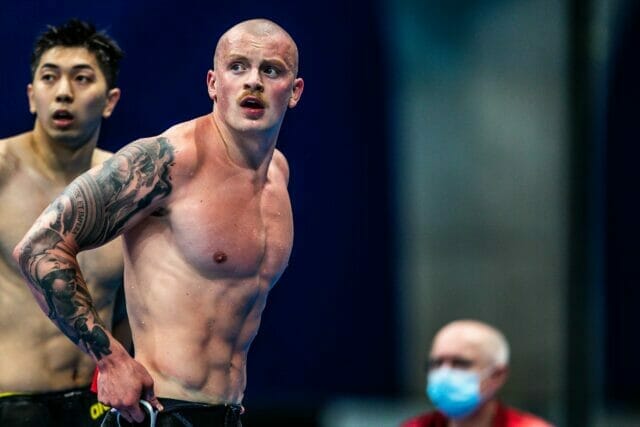 He and his professional dance partner Katya Jones performed a jive to “Little Bitty Pretty One” by Frankie Lymon and The Teenagers which earned 27 points, the lowest score of the night by one point. This was a relatively consistent score for the pair who earned 29’s the past two weeks, landing themselves in the dance-off last week where they beat another team to stay in the competition.

As usual, they incorporated a display of Peaty’s athleticism into the foot-work-focused dance: him leaping up onto a pool table.  But, after the public votes were counted, Peaty and Jones were still in the bottom two and had to compete in this week’s dance-off against television presenter and chef Tilly Ramsey and her dance partner Nikita Kuzmin. They each re-performed their dances.

The judges said they had a difficult time choosing who to eliminate, but ultimately Peaty and Jones were voted off.

“I’m so grateful for my time on this show, from the highs of performing in front of millions and the extreme challenge of learning a new routine within 3 days every week,” Peaty wrote on social media Sunday night.

He elaborated on the emotions that spanned swimming, fatherhood, and the competition in general: “I didn’t know how much it meant to me until I got a bit emotional after my dance off; however, I don’t think it was the dancing that pushed me over the edge, but the two years of the constant challenge with myself combined with the energy to win the Olympics and becoming a father at the same time. My emotions are one of my strongest attributes and I’m not ashamed to show that I’m human.”

“…I thought I was ‘ok’ but I am not. We all have to wear a piece of armour to get the job done and it wasn’t until this week that I knew I could let it go. I’m still healing from the trials and tribulations that elite sporting athletes go through but with that I’m also adapting and learning from life…

The next question is: will Peaty compete in the International Swimming League playoffs which kick off November 13th in Eindhoven?

The answer is still unknown. He is on London Roar’s roster, but team manager Sara McMahon told SwimSwam that “Adam is a strong option for us, but (whether he rejoins the team this season) will depend on a few factors including how far he goes with Strictly.”

London Roar made it through the ISL regular season without Peaty, ranking themselves fourth out of the eight teams moving on to the playoffs. Peaty finished the 2020 ISL season as a strong, while not necessarily a monumental, competitor, ranked #44 in the league MVP scoring.