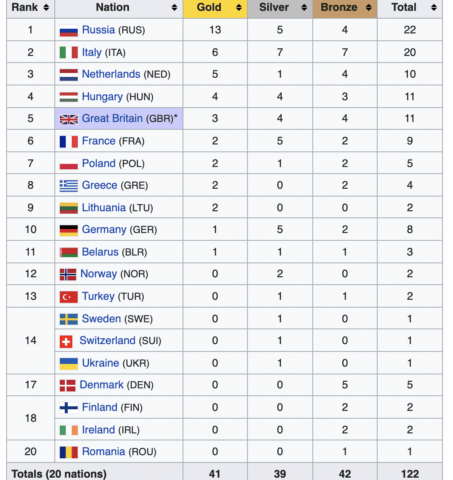 Although Russia retained its status as the leader of the overall medal table at this year’s European Short Course Championships, the remainder of the top ten nations between the 2019 edition and 2021 here in Kazan underwent some notable changes.

Part of the rearranging was due to Great Britain not competing at this meet whereas in 2019 the nation place 5th in the medal standings.

Although Italy won the Championships Trophy title, the nation fell one spot in the medal table from Glasgow, getting surpassed by the Netherlands this time around. A big reason why can be attributed to the Dutch swimmers’ performances across the relays this past week.

Whereas the nation took home zero golds in the relay department in Glasgow, in Kazan the Dutch topped the podium in the men’s 4x50m free relay, as well as both mixed relays, posting a World Record in the mixed medley.

Additionally, Luc Kroon became a first-time gold medalist at these championships for the Netherlands in the men’s 400m free while Marrit Steenbergen grabbed the top prize in the women’s 200m free.

Another top-tier standings changeup can be attributed to Sweden’s Sarah Sjostrom competing at this 2021 edition. The 28-year-old wreaked major havoc across the women’s events, taking home gold in the 50m/100m freestyle, the 50m/100m butterfly, as well as taking bronze in the 100m IM.

As such, Sweden rocketed up the rankings from 14th please two years ago to 4th place here in Kazan.

Nearly the opposite situation occurred with Hungary, as its superstar Katinka Hosszu did compete in 2019 but did not race here.

In 2019, Hosszu was a one-woman wrecking ball, capturing 4 individual golds across the 200m fly and all 3 women’s IM events.

In her absence this past week, Hungary slid down one spot, but its overall medal count dropped from 11 to 5. Taking two gold medals from this year’s meet was Szebasztian Szabo, with the former Serbian national team member scoring the top spot in the men’s 50m free and 50m fly, with the man tying the World Record in the latter event.