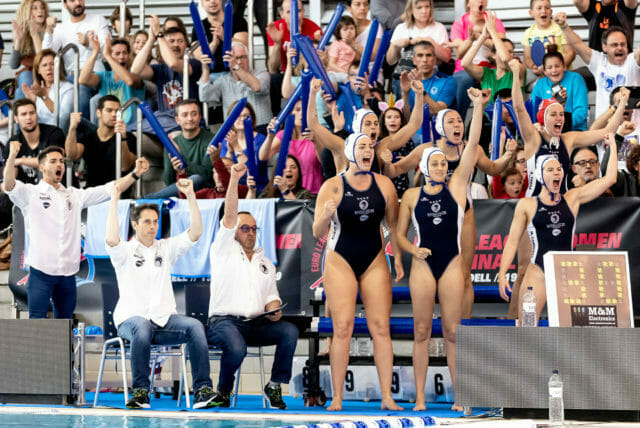 Two Italian and two Spanish sides qualified for the semis. The teams from Sicily, Palermo and Ortiga cruised with ease, as expected, Barcelona came up big in Budapest to down BVSC while Sabadell won one of the longest penalty-shootouts in history: the 34th shot decided the outcome in Savona.

RN Savona has been the team of ties this autumn – they managed to qualify with three draws from the second phase of the Champions League qualifications, then a single-goal loss and a tie eliminated them from the play-offs (against Crvena Zvezda), only to continue with another draw in Sabadell in the quarter-finals. And eventually the return leg also ended in an even score and for quite a while even the shootout seemed to become an infinity draw…

Savona took a 6-4 lead by halftime but remained scoreless for almost the entire third quarter despite having three man-ups – while the Spaniards turned the game by netting three. Niccolo Rocchi’s late goal three seconds before the last break halted Savona’s bad run and levelled the score at 7-7. However, Sabadell was on a roll and with 4:36 to go they went 8-10 up. The Italians pulled one back from their next possession and with 2:51 remaining Lorenzo Bruni equalised once more for 10-10. Both teams could have won the fight, but the last man-ups were missed at both ends so the decision was left to the penalty shootout.

Well, it came a bit later than expected. The shooters were exceptionally precise, the first 30 penalties all hit the back of the net. Savona’s Spanish veteran Guillermo Molina made the first miss, but Bernat Sanahuja’s shot was also stopped by the hosts’ goalie. However, Eduardo Lorria added another save and Gonzalo Lopez buried the 34th shot to close down the contest after 17 rounds.

Fellow Spanish side CN Barcelona didn’t go through the similar nerve-wrecking moments though they also needed some heroic efforts to beat BVSC in Budapest after the 6-6 draw at home. The Magyars blew away a two-goal win lately in the first leg – and that hit back this evening as they were too nervous in offense while the Spaniards seemed to learn some lessons from the first game. The second period was decisive when Barcelona could shut out the home side and build a 3-6 lead. BVSC had a 12:47 minutes long silence and that forced them into a chasing game. Indeed, they managed to climb back from 4-8 to 8-9 by the beginning of the fourth, there they had a man-up to equalise but missed it while the Spaniards converted theirs for 8-10. The Hungarians got closer once more at 9-10, then Sabadell’s experienced world and European silver-medallist veterans Roger Tahull and Blai Mallarach netted two action goals to secure their team’s berth in the semis.

So it’s going to be two Spaniards up against two Italians as the Sicilians didn’t make any mistake. Palermo smashed Mladost once more, this time netting 16, while title-holder Szolnok never got close to make a miracle against Ortigia. The Hungarians went ahead a couple of times at the beginning but after 4-3 Ortigia staged a 0-6 run and never looked back – indeed they earned another 5-goal win.