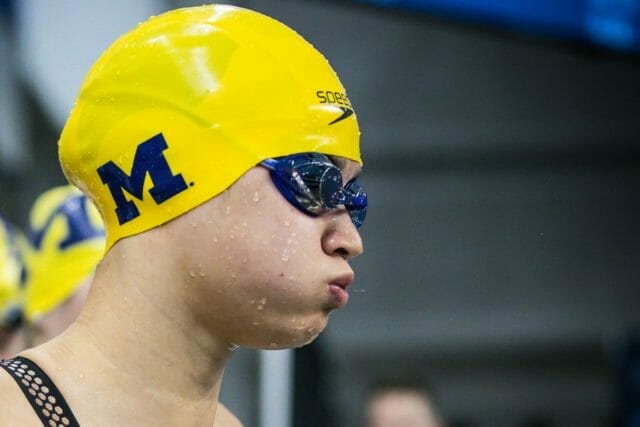 The annual SMU Classic kicked off yesterday (10/8), and as usual, the small invite is featuring impressive early season speed. This year’s invite features swimmers from SMU, Michigan, Louisville, Arizona, and Mizzou. Miami (FL) sent a women’s squad, while Texas A&M sent a men’s team. Following the first day of the meet, Michigan leads women’s scoring by just 2 points over Louisville, while the Michigan also lead with a 7-point margin over 2nd place Louisville.

The Wolverines kicked off the meet, and their official season, with an NCAA ‘A’ cut in the women’s 400 medley relay. Casey Chung led the Michigan squad off in 52.86, with freshman Letitia Sim splitting 59.38 on breast, Maggie MacNeil splitting 50.88 on fly, and freshman Lindsay Flynn anchoring in 47.36. Flynn’s 47.3 split is enormous for Michigan at this stage of the season, as evidenced by her split being the fastest in the field by over a second. Of course, Tokyo Olympic Gold medalist Maggie MacNeil also led the field of flyers, although her 50.8 split isn’t particularly fast for her, as her best flat-start time in the SCY 100 fly is 48.89. Michigan touched in 3:30.48, slipping under the ‘A’ cut of 3:31.66.

Notably, the defending NCAA champion and NCAA record holder didn’t race the 100 fly. In her place, Louisville’s Gabi Albiero picked up the win with a formidable 52.00. The swim was just off Albiero’s best of 51.59. Despite racing in the B final, it was actually Louisville’s Christiana Regenauer who posted the 2nd-fastest time in the event, swimming a 52.51. If you’re unfamiliar with the format of the SMU Classic, each team is permitted to enter 2 swimmers per event, one of whom will race in the A final, the other in the B.

Letitia Sim was on fire for Michigan in her first official outing with the team. The freshman won the women’s 100 breast, clocking a 59.09 to break the pool record, which was held by USC’s Riley Scott from 2018. Sim was the only swimmer in the field to break 1:00. She also swam in the B final of the 100 fly, clocking a 53.06.

Michigan kicked off the meet by winning a tight race with Louisville in the 400 medley relay. Will Chan split 51.70 for the Wolverines on the breaststroke leg, which gave the team enough of a cushion over the Cardinals to hold on through the back half of the race. Nick Albiero flexed his fly speed early in the season, providing a 45.06 fly split for Louisville on their relay.

Michigan’s Will Chan backed up his speedy relay split, going on to win the men’s 100 breast in 52.14. Chan broke the meet and pool records with the swim. The pool record was an oldie, and was held by a former Wolverine: Richard Funk, who swam a 52.31 back in 2014.