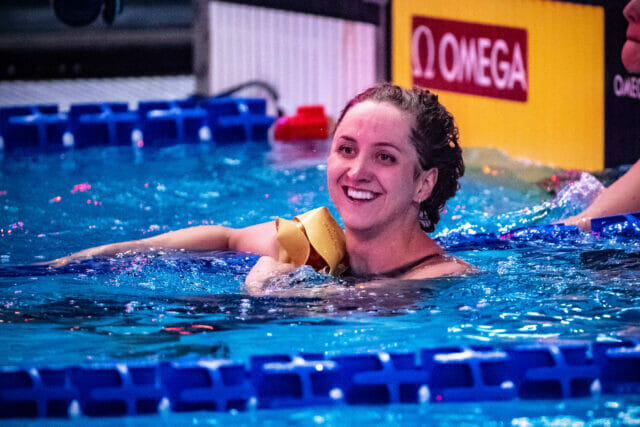 The Toronto Titans fended off the Aqua Centurions and DC Trident to claim second place in the third of six ISL playoff matches on Friday, keeping the club’s hopes of qualifying for the final alive.

After the Centurions scored 22 points to Toronto’s 10 in the mixed medley relay, the club appeared well on its way to claiming the runner-up position, up by 25 on the Titans with just four events to go.

However, as we know, things can change pretty quickly in the ISL.

Toronto outscored the Centurions 19-0 in the women’s 400 IM, bringing them within six points of second, and the DC Trident had a big jackpot win from Bailey Andison in the event to bring them back in the fight, trailing the Titans by just 10.

Entering the skins, the three clubs were separated by just 23 points, the smallest gap between the second and fourth teams at that point of a match in ISL history. The previous closest was a 48.5 margin from Match 2 of Season 2, while the closest this season was 78.5 from Match 5.

Toronto came through in a big way in the skins, which were both freestyle, starting with a runner-up showing from Kasia Wasick in the women’s event.

In the second round, Wasick took second to Energy Standard’s Sarah Sjostrom to advance to the final, and Sjostrom jackpotted Aqua’s Holly Barratt and DC’s Anna Hopkin to pull even more points away from Toronto’s counterparts.

Wasick ended up taking second to Sjostrom in the final, avoiding the jackpot and scoring 21 points, more than double Aqua’s total (nine) to put them into second place by nine points over the Centurions. The Trident only scored seven points and were now a distant 34 points back of Toronto.

The race for second was all but over after the opening round of the men’s skins, as both Centurion swimmers—Alessandro Miressi and Vladislav Grinev—failed to advance and combined for just five points in the event.

Toronto’s Lorenzo Zazzeri took third and the Titans finished with 407 points to Aqua’s 390. DC kept things close as Aleksandr Shchegolev made the final—falling to Energy Standard’s Kliment Kolesnikov—to score 19 points and help the club finish with 383.

ISL Playoff Standings – Thru Match 3 of 6

In the grand scheme of things, the Titans still have their work cut out for them to qualify for the ISL Final, having now lost to the LA Current, London Roar and Energy Standard this season. Toronto’s main competitor for the fourth spot in the final—along with Cali, Energy and London—was expected to be the Current, but that team looks revamped with the return of Ryan Murphy.

The Titans currently hold second place in the ISL standings with the Condors, Roar, Current and Iron all having one match in hand.

If London were to finish third behind Cali and LA this weekend, they would be tied with Toronto in the league standings for fourth.

The two clubs won’t go head-to-head again in the playoffs, and the Titans have a more favorable matchup next week. London will go up against Energy Standard, LA and DC in Match 5 of the playoffs, while Toronto will take on Cali, Aqua and Iron.

Energy Standard’s Sjostrom was a dominant force en route to winning her second MVP award of the season, having also scored the most individual points in the season-opening match back in August.

Sjostrom put up a massive 87.5 points, picking up individual wins in the women’s 50 free, 50 fly and the freestyle skins, plus a pair of runner-up showings (100 free, 100 fly) and two relay appearances.

Her teammate Siobhan Haughey took second in the MVP race with 67 points, sweeping the women’s 100, 200 and 400 free. Haughey set a new Hong Kong Record in the 400 free on Thursday and then swam the second-fastest 200 free of all-time on Friday.