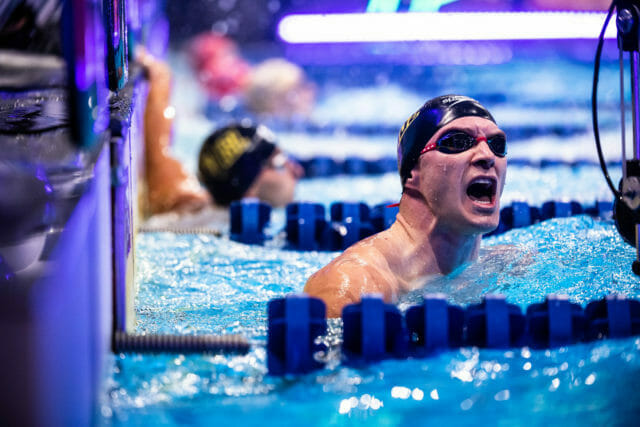 The second match of the 2021 ISL playoffs will see the third through sixth-ranked teams from the regular season square off.

Despite the tightness of the rankings, London Roar is the strongest of the four clubs competing by a significant margin. The Toronto Titans narrowly out-rank the LA Current for the time being, but LA returns one of its biggest stars this weekend: Ryan Murphy.

Toronto, meanwhile, has lost Blake Pieroni and Finlay Knox for the playoffs, both of whom were vitally important to the Titans’ success in Naples.

London still doesn’t have Adam Peaty, but the return of Kirill Prigoda and Tom Dean is huge.

The London Roar brings a strong butterfly crew to Eindhoven, led by Emma McKeon, Marie Wattel, Laura Lahtinen, and Ilaria Bianchi on the women’s side, and Vini Lanza and Teppei Morimoto on the men’s side. London has all of the bases covered in the women’s fly, with McKeon also being a major relay asset. Lanza and Morimoto were both vital during the regular season in Naples, though Lanza is also one of London’s top IMers, potentially giving him a heavy event schedule.

The Toronto Titans bring in Louise Hansson and Laura Stephens on the women’s side, and Marius Kusch, Grigori Pekarski, Alberto Razzetti, and Max Litchfield on the men’s. Hansson moved way up the all-time rankings in the 100 SCM fly during the regular season and is also a threat should the 50 skins race be butterfly. Stephens, meanwhile, covers the 200 fly. Kusch and Pekarski handle the sprint fly events on the men’s side while Razzetti and Litchfield are both solid 200 butterfliers. Razzetti had a huge regular season, breaking Italian National Records in both the 200 fly and 400 IM, and should remain a threat in Eindhoven.

The LA Current’s fly group is led by Tom Shields, Tomoe Hvas, and Maxime Rooney on the men’s side, and Anna Ntountounaki, Helena Gasson, and Alyssa Marsh on the women’s. Shields had a wildly successful tour on the FINA World Cup while Hvas had a great albeit brief appearance at the 2021 European Championships in Kazan. Ntountounaki, Gasson, and Marsh are all relative underdogs but are reliable for some points.

The Aqua Centurions bring recent world record holder Szebasztian Szabo, as well as Matteo Rivolta and Leonardo de Deus on the men’s side. Szabo should be the favorite to win the 50 and possibly the 100, with Rivolta alongside to pick up additional points. De Deus is a strong 200 flyer, an event he and fellow Centurion Chase Kalisz could pick up points in. On the women’s side, Alessia Polieri, Laura Taylor, Holly Barratt, Silvia di Pietro, and Elena di Liddo cover the 50, 100, and 200 flys quite well, though Aqua is arguably stronger in the women’s 50 fly than the 100 and 200.

The London Roar has two SCM World Record holders in Minna Atherton and Kira Toussaint, while Guilherme Guido and Luke Greenbank have also recently been climbing up the all-time rankings. Atherton and Toussaint have gone 1-2 in both the 100 and 200 on multiple occasions, while Guido is known for jackpotting his competition in the 50. Throw in Christian Diener and the London Roar is one of if not the strongest backstroke team in the league.

The Toronto Titans have three superstars in Kylie Masse, Lisa Bratton, and Shane Ryan. Their “supporting cast” of Michelle Coleman, Max Litchfield, and Cole Pratt is also quite strong, giving them one of the best backstroke squads in the league this season. Masse and Bratton have gone 1-2, in either order, on numerous occasions in the 200 backstroke and are still a formidable duo in the 100. Masse and Coleman are also tough in the 50, and all three are vital on the medley relays. Ryan was a huge asset in the regular season in the 50 and 100 backstrokes while Litchfield was a solid scorer in the 200. Backstroke was perhaps Toronto’s most impressive discipline in the regular season, and if they can maintain or improve upon their results in the semifinals, they could give any team a run for their money.

The LA Current brings back World Record holder Ryan Murphy, one of the ISL’s mightiest backstrokers. Murphy was absent during the regular season, though LA got along pretty well with Apostolos Christou, who stepped up in Naples, as well as Tomoe Hvas and Maxime Rooney. Murphy will strengthen LA in backstroke and on the relays, though is return also strengthens LA’s fly, IM, and sprint free efforts in that Rooney and Hvas can now focus on those events. On the women’s side, breakout star Ingrid Wilm returns, alongside former World Record holder Kathleen Baker. We could also see Beryl Gastaldello in the 50 backstroke as she is an all-around sprint specialist and Wilm is better suited to the 100 and 200 distances, as well as more valuable on the medley relays.

Backstroke is one of the weaker disciplines for the Aqua Centurions though they could still make some noise this weekend. On the men’s side, Thomas Ceccon and Alessandro Miressi lead the charge in the sprints, while Matteo Ciampi and Stefano Ballo fill in on the 200, though the men’s 200 back is a relative weakness for the Centurions. On the women’s side, Silvia di Pietro and Holly Barratt lead the charge, particularly in the 50- and 100-meter distances. Mariia Kameneva, Martina Caramignoli, Laura Taylor, and Federica Pellegrini play supporting roles across all distances, though the 200 backstroke is a relative weakness for the Centurions.

The London Roar is the team to beat this weekend in the breaststrokes. Led Annie Lazor, Alia Atkinson, Jenna Laukkanen, Kirill Prigoda, Ross Murdoch, and Sam Williamson, London has the potential to both win the skins, if breaststroke is selected, as well as sweep the 100 and 200 breaststrokes on both the women’s and men’s sides. The return of Prigoda is extremely important, particularly as Adam Peaty remains absent.

The Toronto Titans boast a small yet strong breaststroke crew with Fabian Schwingenschlogl, Anton McKee, Kelsey Wog, Dominika Sztandera, and Tess Cieplucha. Schwingenschlogl is fresh off a successful European Championships giving him some momentum. However, Toronto is relatively weak in women’s breaststroke.

Breaststroke is the LA Current’s weakest discipline. Christopher Rothbauer will need to be on form in order to keep LA in the game this weekend, especially with the continued absence of Will Licon. LA’s female breaststroke crew is Anastasia Gorbenko, Julia Sebastian, Imogen Clark, and Sarah Franceschi. Gorbenko has been swimming great in 2021, though she is so versatile and will be needed in other disciplines, meaning one of the others will need to step up in a big way to hold off London and Aqua.

Last but definitely not least, the Aqua Centurions bring in three heavyweights with Arno Kamminga, Fabio Scozzoli, and Nicolo Martinenghi. Martinenghi in particular had a great European Championships and will be especially dangerous in the 50 and 100 breaststrokes. On the women’s side, Martina Carraro and Arianna Castiglioni have their work cut out for them though they should be reliable for some points, especially in the sprints.

Overall, the freestyles could be the most exciting races to watch this weekend.

The London Roar has a huge freestyle roster, led by (individual) Olympic champions Kyle Chalmers and Tom Dean, as well as Duncan Scott, Dylan Carter, Katsumi Nakamura, and Kenzo Simons who cover the men’s sprints thoroughly with Zac Incerti and Edward Mildred taking on the 400. Emma McKeon leads London’s women’s freestyle crew, accompanied by Marie Wattel, Kim Busch, Andi Murez, Katie Shanahan, and Laura Lahtinen. London’s women are definitely better in the sprints than the 200 and 400 though, their only relative weaknesses in this discipline.

The Toronto Titans will rely on Shane Ryan, Luc Kroon, Max Litchfield, Yuri Kisil, Marius Kusch, and Brent Hayden to get the job done on the men’s side. The loss of Blake Pieroni is a pretty hard blow, so the Titans will need to swim big this weekend in his absence. The Titans have a stacked women’s freestyle roster with Michelle Coleman, Louise Hansson, Kasia Wasick, Julia Hassler, Kaersten Meitz, and teen superstar Summer McIntosh. The Titan women cover all the bases and will be a huge threat to London in the freestyles.

The LA Current boasts some of the best female freestylers in the league across all distances. Sprinters Abbey Weitzeil and Beryl Gastaldello, as well as Madison Wilson who can swim everything from the 50 to the 400, are threats to win every freestyle distance this weekend, while Valentine DuMont adds support. LA’s men’s freestyle roster includes Ryan Held, Maxime Rooney, Fernando Scheffer, Martin Malyutin, Brett Pinfold, and Vladislav Bukhov. LA is particularly strong in the 200 and 400-meter distances, thanks to Scheffer and Malyutin.

The Aqua Centurions have a potent women’s sprint crew with Silvia di Pietro, Mariia Kameneva, and Holly Barratt. Laura Taylor, Martina Caramignoli, and Federica Pellegrini are solid performers in the middle-distance events as well. The middle-distance freestyles are stronger on the men’s side, thanks to Matteo Ciampi and Stefano Ballo. As for the sprints, Alessandro Miressi, Thomas Ceccon, Vladislav Grinev, and Marcelo Chierighini are strong performers in the 50 and 100 and combine for a great 4 x 100 freestyle relay.

The London Roar has some very strong IM’ers, but they are all also, unfortunately, required in other disciplines. Duncan Scott and Vini Lanza are great across all three IM distances, though Scott is also needed in the freestyles while Lanza is needed in the butterfly. Christian Diener, meanwhile, could be called upon to swim backstroke. On the women’s side, Sydney Pickrem and Katie Shanahan could have a little more of an option to focus exclusively on the IMs, though Shanahan could get called up to swim the 200 or 400 freestyle as well.

Toronto Titans have lost Finlay Knox, which will hurt, though Max Litchfield and Alberto Razzetti have had great seasons so far, and Cole Pratt has proven his ability to put points on the board in the IMs as well. The Titans have a very strong women’s IM roster with Summer McIntosh, Tess Cieplucha, Kayla Sanchez, Louise Hansson, and Laura Stephens. McIntosh could win the 400 IM while Sanchez or Hansson could both place top-3 in the 100. Overall the Titans look good in this discipline.

The LA Current brings in a small but formidable IM crew led by Tomoe Hvas and Anastasia Gorbenko, either of whom could win the 200 this weekend. Beryl Gastaldello is the ISL Record holder in the 100 IM, though we didn’t see much of her in this race in Naples, while Abrahm DeVine and Sarah Franceschi provide support for LA in the IMs.

Finally, the Aqua Centurions bring in Olympic champion Chase Kalisz as well as Ilya Borodin, and Thomas Ceccon on the men’s side. Their women’s roster includes Mariia Kameneva, Rika Omoto, and Fantine Lesaffre. While the IM should be a strong discipline for the Centurions their results were pretty mixed throughout the regular season.

Overall, the London Roar is capable of putting together the strongest relays across the board this weekend. The LA Current could challenge them in the mixed medley relay, though they are the favorites in both the men’s and women’s 4 x 100 medley relays and freestyle relays.