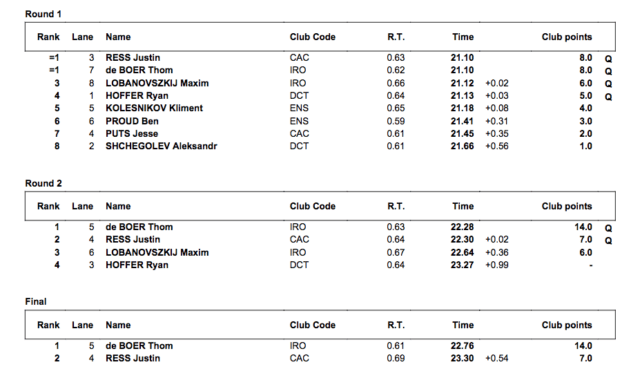 The team battle between Cali and Energy Standard was the main storyline for the opening match of the 2021 ISL Playoffs, but Iron’s Thom de Boer left his mark on the meet by roaring to a decisive victory in the men’s freestyle skins—his fourth such win this season and third in a row.

de Boer was the runner-up to Cali’s Justin Ress in the individual 50 free on Day 1, finishing in a time of 21.08 to Ress’ 21.04, and the two renewed hostilities with a three-round showdown to cap off the match in today’s skins.

de Boer was in full control in round three, clocking 22.76 to win the event, with Ress, who did what he had to do to get the Condors the match victory by advancing to the final, back in 23.30 for second.

de Boer has yet to win an individual event in his ISL career, but he’s now won the freestyle skins all four times he’s had the chance to race them in Season 3.

The Dutchman’s victory in today’s playoff match was actually the first time he was slower in the opening skins round than he was in the individual race.

The 29-year-old came into the playoffs riding a ton of momentum, having won three gold medals and one bronze (all relays) at the European SC Championships last week. One of those golds came in the mixed 200 medley relay where de Boer anchored in 20.16 to help the Dutch team come from behind and set a new world record of 1:36.18.

The Condors were in control of the match most of the way, but Energy Standard made a big push late to carry a 25-point lead into the skins.

However, Maaike de Waard won the women’s backstroke skins for Cali and Ress added a runner-up finish for the men (while Energy Standard’s Kliment Kolesnikov and Ben Proud both failed to advance out of Round 1), and the Condors prevailed in the end by 12.5 points.

In the battle for third, it was all DC on Day 2, though de Boer and Maxim Lobanovszkij combined for 48 points in the men’s skins to make it relatively close at the end.

Energy Standard’s Ilya Shymanovich comes away with the Match MVP award after scoring 62.5 points, buoyed by a pair of massive jackpots in the men’s 50 breast (24 points) and 100 breast (19 points). The Belarusian also won the men’s 200 breast and was on Energy Standard’s winning mixed medley relay.

His teammate Sarah Sjostrom finished just three points back with 59.5, having won the women’s 50 free and 50 fly, taken second in the 100 free and 100 fly, and been a key relay contributor.

Cali’s Lilly King, who, like Shymanovich, swept the breaststroke events and scored some big jackpots, ranked third with 58.0 points.