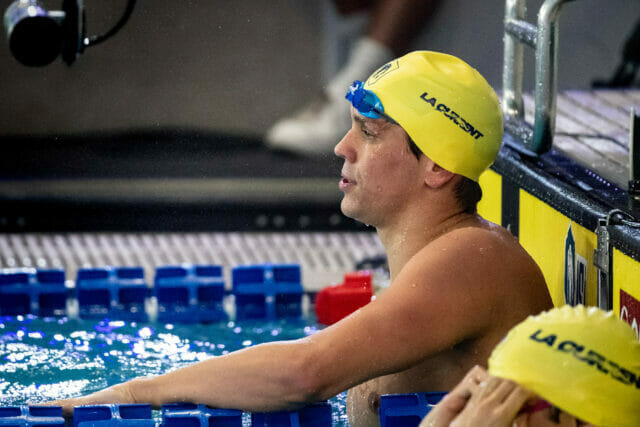 By making it to the final round of the men’s butterfly skins race on Sunday, Tom Shields locked in the win and four playoff points for the LA Current in Match 2 of the 2021 International Swimming League playoffs. The LA also squad got a huge boost this weekend from Ryan Murphy, who took home match MVP honors in his post-Olympics debut.

The Current entered men’s skins leading London 482.0 to 469.5. Shields, Aqua’s Matteo Rivolta and London’s Kyle Chalmers and Dylan Carter advanced to the second round of skins, but the Roar swimmers were both eliminated before the final round. That was exactly what LA needed to get it done, no matter that Shields ended up second.

On the women’s side, Anastasia Gorbenko also got a huge breaststroke skins win for LA, defeating the world record holder Alia Atkinson, of the Roar, in the final round.

LA has a tough draw in getting paired with London throughout the playoffs and is extremely unlikely to be able to challenge for the win in either of its next two matches when the Cali Condors, and then Energy Standard, enter the mix.

If London bounces back strong from this second-place finish, which might entail bringing in Adam Peaty as reinforcement now that he’s been eliminated from Strictly Come Dancing, it could very conceivably secure two more second-place finishes behind the Condors and Energy Standard. That would mean a total of nine points for London in the playoff standings (3, 3, 3) while LA would have eight in that scenario (4, 2, 2).

Toronto, meanwhile, is paired with a short-handed Aqua Centurion team and should also be able to secure a couple of second-place finishes in the weeks to come. That would also mean a total of eight points in the playoff standings (2, 3, 3).

That would leave LA and Toronto in a tie, playoff points-wise, for the fourth spot in the final after Energy Standard, Cali and London. No potential tiebreak criteria has been announced, but presumably, it could be total points scored. Regardless, had LA taken second today, it would instead be facing an uphill battle to reach eight points over the next two meets rather than remaining in a workable position with third-place finishes.