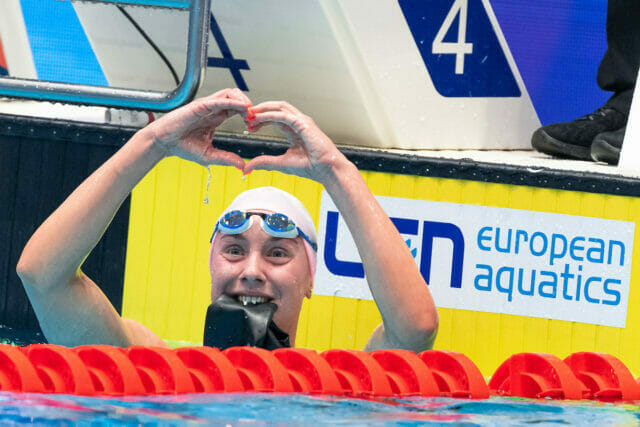 The session will be highlighted by a pair of distance races. Russian Anastasia Kirpichnikova, after nearly breaking the 1500 World Record two nights ago, comes in as the top seed in the women’s 400 free. The men’s 800 free will feature another showdown of  Olympic medalists Florian Wellbrock and Gregorio Paltrinieri, after Wellbrock bettered Paltrinieri and rattled his 1500 World Record earlier in the meet.

The men’s 50 breast should be another race to watch closely, as the three fastest 50 breast splits in history have taken place this week from Turkey’s Emre Sakci, Belarus’ Ilya Shymanovich and Italy’s Nicolo Martinenghi. The Italian comes in as the top seed after breaking the meet record in the semis with a 25.37, while Cameron van Der Burgh’s 2009 World Record of 25.25 seems very much in range for all three swimmers.

Also competing tonight will be Sweden’s Sarah Sjostrom, who will look to add another medal to her haul as the top seed in the 50 fly. Another sprinter, Russia’s Kliment Kolesnikov, highlights the men’s 100 free final after sweeping the sprint backstrokes earlier in the week.

Italian Marco Orsi dominated the first event of the night, taking the men’s 100 IM by three quarters of a second in 50.95. Orsi went out fast, touching at the 50 wall in 22.89 and then widened his lead on the back half.

Orsi’s victory denied Greece’s Andreas Vazaios bid to be a double-winner at these championships after winning the 200 IM earlier in the meet. Vazaios was also out strong, but was outsplit by over a half second over the second 50 to settle for the silver in 51.72.

Coming in second was the former European Record holder, Emre Sakci of Turkey. Sakci’s final time of 25.39 was a tenth off of his lifetime best of 25.29.

100 breast champion Nicolo Martinenghi of Italy touched in third for the bronze in 25.54. Martinenghi came into the final as the top seed after setting the meet record of 25.37 in last night’s semis.

The Netherlands’ Marrit Steenbergen went out fast in the 200 free final and never relinquished the lead, touching first for the gold in 1:52.75. Steenbergen flipped at 25.98 at the first and had the field’s fastest 2nd and 3rd 50 splits to give her an insurmountable lead at the 150 as she held on to win after a final 50 split of 29.70.

The Czech Republic’s Barbora Seemanova touched in second for the silver in 1:53.58. Seemanova also went out quick, flipping only four tenths behind Steenbergen at the 100, though began to fade down the stretch but was able to hold of Sloveni’a Katja Fain.

Fain was the hardest-charging swimmer of the final, posting the field’s fastest closing split of 28.96 to snag the bronze in 1:53.88.

The Italians rounded out the podium with Lorenzo Mora touching in 2nd in 1:49.73 to take the silver, while Michele Lamberti grabbed the bronze in 1:50.26. Both Italians were out quick, with Lamberti leading at the 100 in 54.04 with Mora right behind him in 54.05.

Russia’s Anastasia Kirpichnikova cemented her status as Europe’s distance queen by winning the 400 free in 3:59.18. Kirpichnikova led wire-to-wire after taking the lead in the first 50 and never letting up. The win also signfies a clean sweep if the 400-800-1500 free at these championships for the Russian.

The host nation also earned a silver medal from Anna Egorova, who touched second behind Kirpichnikova in 4:00.52. Egorova swam at her countrymate’s hip for the first 250 meters before faded slightly down the stretch.

Coming in for the bronze was Germany’s Isabel Gose in 4:01.37. She was in a tight race with Hungary’s Ajna Kesely for the bronze and posted the field’s fastest closing 50 in 29.16 to secure her spot on the podium.

Russia’s Ilya Borodin took home the gold for the hosts, touching in first in 3:58.83, a second and half clear of the field. Borodin used a strong middle 200 to open up a full second lead going into the freestyle and expanded his lead over the final 100. Borodin had the field’s fastest breaststroke split of 1:07.35.

Touching in second was Italy’s Alberto Razzetti, who stopped the clock in 4:00.34 to add a silver to his medal haul. Razzetti, who was the silver medalist in the 200 fly, played to his strengths and took the lead early, though was unable to hold off Borodin’s middle 200 surge.

Hungary’s Hubert Kos used the field’s fastest backstroke split to power his way to the bronze in 4:03.16.

The Italians took home the gold in the women’s 50 breast, though it wasn’t teenage sensation and European Record holder Benedetta Pilato, but rather Arianna Castiglioni who touched first in the upset win. Castiglioni’s 29.66 is about a half second off her lifetime best of 29.09 from the ISL’s Napoli stop in September.

The 16 year old Pilato touched second in 29.75, securing both the gold and silver for Italy. Pilato has exploded onto the international scene in recent years with sprint breaststroke speed beyond her years, though has to settle for a disappointing silver in her signature event.

Finland’s Veera Kivrinta was disqualified in the final.

Russia’s Kliment Kolesnikov wrapped up a very successful week in Kazan with a new lifetime best to take the gold in the men’s 100 free in 45.58. Kolesnikov flipped first at the 50 in 21.76 and then posted the field’s fastest closing 50 to secure the victory. The Russian’s prior best time of 45.87 came from last December’s Russian Nationals in St. Petersburg.

Coming in for the silver was Italy’s Alessandro Miressi in 45.84.. Miressi went out quick with Kolesnikov in 21.81 en route to breaking his own lifetime best by .06. Miressi’s prior best of 45.90 came at the 2019 SC Euros in Glasgow.

Vladislav Grinev used a quick 2nd 50 of 23.93 to claim the bronze medal, putting two swimmers on the podium for the host nation.

Sweden’s Sarah Sjostrom blasted a new lifetime best to break the SC Euros record in 24.50. Sjostrom has been a bit up and down during these championships, with her 50’s being magnificent but her 100s being well off her lifetime bests. The swim marks Sjostrom’s first best time in the event since 2017, when she went 24.52 at the Berlin FINA World Cup stop.

Joining her under 25 seconds was The Netherlands’ Maakie De Waard, who touched for the silver in 24.97, just off her lifetime best off 24.94.

Italy’s Silvia Di Pietro and Anna Ntountounaki tied for the bronze, stopping the clock in 25.09.

The men’s 800 free final provided us with perhaps the most exciting race of the entire meet, with Italy’s Gregorio Paltrinieri and Germany’s Florian Wellbrock essentially stroke for stroke for all 800 meters of the race. Paltrinieri got revenge for his loss in the 1500 by coming out on top by just .05 to take the gold in 7:27.94 to Wellbrock’s 7:27.99.

Throughout the entire race the largest lead that either swimmer held was less than a quarter second, which came at the 550 mark with Paltinieri leading Wellbrock 5:08.52 to 5:08.74. Both swimmers were well under Wellbrock’s meet record, which he set in the prelims.

Germany’s Sven Schwarz secured his second medal of the meet by touching in third for the bronze in 7:33.85. Schwarz was also the bronze medalist in the 1500 earlier in the meet.

Notably, the official results show de Boer’s reaction time as -.01 on his relay takeoff, which would signify a false start. However, there have been instances where automatic timing have been overturned due to margin of error issues with the timing system. This notably happened at last summer’s Olympic Games in the men’s 4×200 free relay

Touching in 2nd for the silver was Italy’s team of Michele Lamberti, Nicolo Martinenghi, Elena Di Liddo and Silvia Di Pietro, who stopped the clock in 1:36.39. Russia’s squad of Kliment Kolesnikov, Oleg Kostin, Arina Surkova and Maria Kameneva took the bronze in 1:36.42.

Also notable was Ilya Shymanovich‘s breaststroke split on Belarus’ 5th place relay. The newly co- World Record holder in the 50 breast split a blazing 24.72, which clocks in as the first ever 50 breast split under 25 seconds.