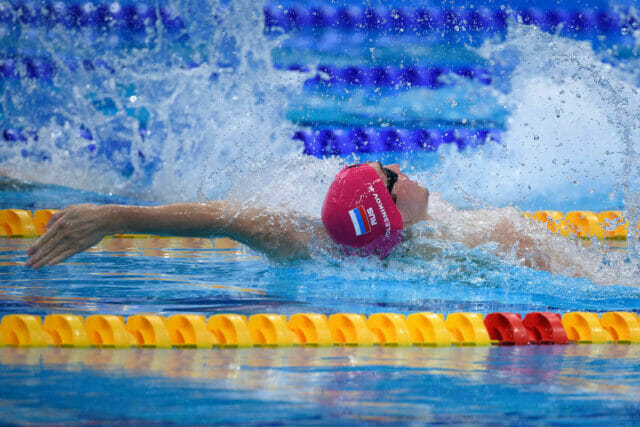 The session starts off with a trio of finals right away, with Greek Record holder Andreas Vazaios taking the top seed in the men’s 200 IM, Swede Sarah Sjostrom looking to sweep the sprint freestyles in the women’s 100 free final and Russia’s Kliment Kolesnikov perhaps hunting for the record books in the men’s 100 back final. Hungary’s Kristof Milak will seek redemption in the 200 fly final after missing the podium entirely in the 100 fly, while current World Record holder Kira Toussaint will take on the 100 back semi/50 back final double. Sjostrom will also face a tough double, with the 100 fly semis scheduled to start just 31 minutes after her 100 free final.

Greece’s Andreas Vazaios successfully defended his SC Euros title in the 200 IM, touching in 1:51.70 to take the gold. Vazaios used a blistering middle 100 with a 27.05 back and 32.29 breast split to put himself a full second clear of the field at the 150 and never looked back, winning by three quarters of a second. That swim is a bit off of his own meet and European Record of 1:50.85, which he set in 2019.

The Italians rounded out the podium, with Thomas Ceccon finishing in second for the silver and Alberto Razzetti sneaking in for the bronze. The Italians both closed hard, with Ceccon posting the field’s fastest closing split of 26.87 and Razzetti having the second fastest in 27.22.

18 year-old Hungarian Hubert Kos finished just off the podium in fourth after opening the race hard and leading at the halfway point. That marks a near two second drop for Kos, with his previous best clocking in at 1:54.59 from last month’s Berlin FINA World Cup stop.

Gold medal favorite Sarah Sjostrom completed her sweep of the Euro sprint freestyle titles, taking gold in the 100 free in 51.26. Sjostrom had the early lead at the 50 by nearly a half second, splitting 24.70 on the way out. She held on for victory by over 3 tenths, though was well off her own European Record of 50.58 from 2017.

Touching for the silver in 51.58 was Poland’s Kasia Kasick, who also was runner-up to Sjostrom in the 50. Wasick closed hard, posting the field’s fastest 2nd 50 split of 26.42, but it wasn’t enough to make up Sjostrom’s early lead. That swim is just off of Wasick’s best time of 51.44 for September’s ISL meet in Napoli. The Netherlands’ Marrit Steenbergen was the only other swimmer under 52 seconds, claiming the bronze in 51.92.

Russia’s Kliment Kolesnikov will stand atop the backstroke podium for a second time, winning the gold in the 100 in 49.13 after previously winning the 50 back earlier in the meet. Kolesnikov’s win actually was a come-from-behind victory with the field’s fastest back half split of 25.31 after flipping second at the 50. The swim is a half second off Kolesnikov’s lifetime best and European Record of 48.58.

Romania’s Robert Glinta, the 50 back bronze medalist, was the race’s early leader after flipping at 23.69 at the 50. He was unable to hold off Kolesnikov on the back half, however and touched 2nd for the silver in 49.31.

Touching in third for the bronze of Greece’s Apostolous Christou, who broke his own Greek National Record in 49.87. He set the record in yesterday’s semis at 49.98.

Dutch 200 back champion Kira Toussaint cemented her spot as the top seed in the 100 back heading into tomorrow’s final by winning the second semi in 56.04. Toussaint will return to the pool shortly to attempt to capture her second gold of the meet in the women’s 50 back.

Poland’s Paulina Peda and France’s Analia Pigree tied for the 7th/8th spot for tomorrow’s final, with five swimmers qualifying out of the first semi.

Teenage sensation David Popovici from Romania will take the top seed in the men’s 200 free into tomorrow night’s final after winning the first semi in 1:43.08. Popovici worked his way through his heat, flipping at 5th at the 50, 4th and the 100 and 2nd at the 150 before pulling away on the final 50. The swim marks a half-second best time for the Romanian, with his prior best coming from last week’s Kazan World Cup stop.

Winning the second semi-final was Dutchman Luc Kroon, who won gold in the 400 free in a new Dutch record, in 1:43.33. Kroon’s distance prowess was on display, as he posted the field’s fastest final 50 split of 25.94.

We should be in for a great race in tomorrow’s finals, as the top 6 qualifiers all swam within .54 seconds of each other this evening.

Greece’s Anna Ntountounaki will be the top seed into tomorrow night’s final after winning the first semi-final in 56.49. Ntountounaki used her heat’s fastest back half to be just .05 off her lifetime best from the 2019 Euros.

World Record holder Sarah Sjostrom won the second semi and will be the second seed heading into the final after touching in 56.54. That is well off her lifetime best of 54.61, though her race came just 30 minutes after claiming gold in the 100 free.

Bosnia and Herzegovia’s Lana Pudar qualified for her second final of these championships after finishing fifth in the 200 fly earlier in the meet. The 15 year old slashed two tenths off of her lifetime best.

Russian teenage sensation Evgeniia Chikunova threw down a massive swim in the 200 breast final to win easily and break her own World Junior Record. The 16 year-old outsplit the field by nearly 1.2 seconds on the final 50 to grab the gold in 2:16.88 and chop almost three quarters of a second off her old best and WJR of 2:17.57 from the ISL Napoli stop in September.

Countrymate Maria Temnikova touched 2nd to claim the silver in 2:18.45 to make it a 1-2 sweep for the host nation. Italy’s Francesca Fangio held off a hard charging back half from the Czech Republic’s Kristyna Horska to take the bronze in 2:19.69.

In another surprising fly upset, Italy’s Alberto Razzetti went toe to toe with Hungary’s Kristof Milak, the Tokyo 2020 200 fly gold medalist, and came out on top with a 1:50.24. Razzetti consistently outsplit Milak through the whole race, though the biggest difference came with Razzetti blasting a 28.86 final 50 to secure the victory.

Milak will settle for the silver after stopping the clock in 1:51.11. The swim comes in 1.2 seconds off Milak’s best time from 2019 and continues a somewhat underwhelming meet for the Hungarian. Milak missed the podium completely after touching 4th in the 100 fly during Wednesday’s finals.

Touching in third for the bronze was Russia’s Egor Pavlov, who outsplit Bulgaria’s Antani Iavanov on the final 50 to get on the podium. Iavanov, who also swims in the NCAA for Virginia Tech, will miss the podium after qualifying second out of the semi-finals.

The Nethlands’ Kira Toussaint tops the backstroke podium for the second time at these championships, taking the 50 back in 25.79. Last night, Toussaint won the 200 back and will look to make it a clean backstroke sweep in the 100 tomorrow night after qualifying first for tomorrow’s final earlier in the session. The swim is just off Toussaint’s own European and World Record of 25.60, set in November of last year.

Analia Pigree touched in second in 26.08 to claim the silver. Pigree came into the final as the top seed out of the semis. Toussaint’s countrymate Maaike De Waard touched in third for the bronze in 26.11, which marks a best time for De Waard.

The men’s 200 breast final is setting up to be a great race, as the top four qualifiers into tomorrow’s final were all within two tenths of one another in the semis. Dutchman Arno Kamminga won the first semi-final and will be the top seed heading into tomorrow after posting a 2:02.54.

Russia’s Aleksandr Zhigalov, Belarus’ Ilya Shymanovich and Russia’s Mikhail Dorinov were close on his heels in the second semi and qualified 2nd, 3rd and 4th respectively.

Also lurking as the 7th qualifier is former World Record holder and current SC Euros Meet Record holder Marco Koch of Germany, who posted a 2:04.82 to qualify for the final. Koch’s 100 breast was a bit of a disappointment, where he failed to move onto the final, though a swimmer with his pedigree is difficult to count out in a championship final.

Israeli teenager Anastasya Gorbenko dominated the first semi-final to take the top seed into tomorrow night’s final by posting a 2:06.75. The swim is a little off of the 18 year old Gorbenko’s best time of 2:05.04 from the ISL series in Napoli in September.

Turkey’s Viktoria Gunes, who won the 400 IM earlier in the meet, won the second semi to claim the second seed in 2:07.16. Switzerland’s Maria Ugolkova will be the third seed after finishing behind Gunes in 2:07.47.

Hungary’s Szebasztian Szabo blasted a new SC Euros record in the 50 fly, winning the second semi in 22.00 and breaking Johannes Dietrich’s super-suit era record of 22.07 from 2009. The current World Record stands at 21.75 from Brazil’s Nicholas Santos from 2018.

A pair of Italians followed behind Szabo, with Thomas Ceccon and Matteo Rivolta qualifying 2nd and 3rd, respectively, for tomorrow’s final.

Estonia, a non-traditional European swimming power, will be represented in the final by Daniel Zaitsev, who qualified 7th.

Russian distance star Anastasia Kirpichnikova blasted a massive 15:18.30 in the final of the 1500 free, rattling Sarah Kohler’s 1500 World Record from 2019. Kirpichnikova started off strong and was under World Record pace for a good portion of the race, though fell off the pace later in the race before charging home in a 29.12 final 50 to finish just .29 off of Kohler’s World Record.

A pair of Italians rounded out the podium, with Simona Quadarella taking the silver in 15:34.16 and Martina Caramignoli finishing 3rd for the bronze in 15:37.33.