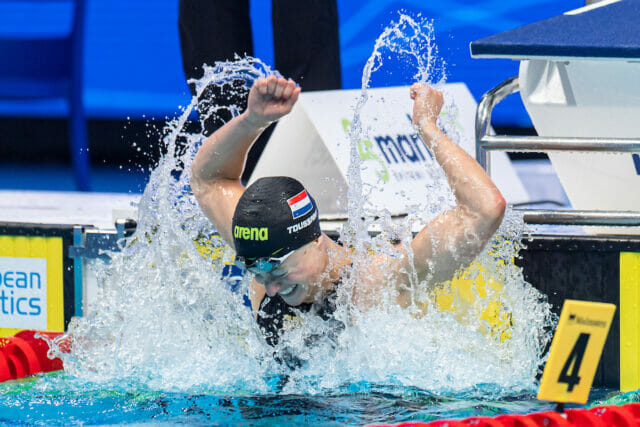 Dutch backstroke ace Kira Toussaint will take to the pool three times this evening, after taking the top seed in the women’s 200 back final, qualifying second after the prelims on the women’s 50 back and will lead off The Netherlands’ women’s 4×50 medley relay. The men’s 50 free final promises to be tight, with Russian Vlad Morozov looking to defend his title against a slew of challengers, including Italian breakout star Lorenzo Zazzeri and top seed Szebasztian Szabo.

After nearly breaking his own World Record in the semi-finals, Belarusian Ilya Shymanovich will look to hold off Dutchman Arno Kamminga in the 100 breast finals. Swedish star Sarah Sjostrom will take on a tough double during the middle of the session with the 100 free semi-final very closely preceding the 100 IM final. Long course World Record holder Kristof Milak will look to get back on track in the men’s 200 fly semi-final after shockingly missing the podium in last night’s 100 fly final.

The women’s 200 back was a two-woman race for the gold, with Kira Toussaint touching first to take the win for the Dutch in a new national record and best time. Toussaint’s race strategy was clearly to attack the 3rd 50, where she split a blazing 30.23 and put herself a full second ahead of Italian Margherita Panziera. Panziera closed hard in 30.68, but the the gap was too much to make up and she settled for the silver.

Touching in third for the bronze was Austrian Lena Grabowski, who set a new Austrian record of 2:04.74 in the process. Grabowski was challenged early by Hungary’s Eszter Szabo Feltothy, but pulled away on the back half with a 1:02.94 2nd 100 split. The bronze marks Austria’s first medal for the championships.

Hungarian Sebasztian Szabo qualified 1st out of the semi-finals and he protected his top seed by taking the gold in 20.72. Szabo has been one of the stars early in the meet, having also pulled off the upset win in last night’s 100 fly final. Szabo’s win marks Hungary’s first ever European championship in the 50 free.

Coming in for the silver was Italian Lorenzo Zazzeri, whose blazing anchor split yesterday helped the Italians set a new World Record in the 4×50 medley relay. Poland’s Pawel Juraszek and defending champion Vlad Morozov of Russia tied for the bronze medal, touching just ahead of Dutchman Thom De Boer.

Finishing in 7th was Austria’s Heiko Gigler, who set a new Austrian record in 21.25.

Russia’s Svetlana Chimrova took off quick with Italy’s Ilaria Bianchi, turning at the halfway point in 59.16 to Bianchi’s 58.78. Svetlana then took off on the third 50, splitting 31.86 to post the fastest split in the field and held on for victory in 2:04.97.

Touching in 2nd for the silver was Denmark’s Helena Rosendahl Bach, who went out very smooth and touched 6th at the halfway point but had the fastest 2nd 100 split in the field to nearly run down Chimrova in 2:05.02. Bach’s final 50 was over a full second faster than Chimrova’s but she ran just out of pool to finish the comeback.

Ialty’s Ilaria Bianchi hung on from her quick start for the bronze. Finishing in fifth was 15 year old Lana Pudar, who set a new Bosnia and Herzegovinian record of 2:05.89.

The defending champ and European Record Holder Andreas Vazaios won the first semi-final to take the top seed into tomorrow’s final in 1:53.08. Touching just behind him in the first semi was Italian Alberto Razzetti, who will take lane 5 tomorrow night after his 1:53.39 performance. Razzetti’s 200 IM is just off of her lifetime best of 1:53.36, which he set during the ISL meet in Napoli in September.

Sweden’s Sarah Sjostrom, fresh off her victory and new meet record in the 50 free last night, will take the top seed heading into tomorrow night’s 100 free final. Sjostrom’s second 50 split was a very pedestrian (by her standards) 27.53, perhaps saving up a bit for the 100 IM final to come in just a matter of minutes.

The Netherlands’ Marrit Steenbergen domianted the first semi-final by over a half second to take the 2nd seed into tomorrow. Poland’s Kasia Wasick and Czech Republic’s Barbora Seemanova qualified 3rd and 4th in 52.41 and 52.46, respectively. The top four seeds heading into tomorrow’s final seem to be a clear cut above the rest of the field, where those four women will battle for three medals.

Fresh off his new meet record in the 50 back from last night, Russian Kliment Kolesnikov breezed his way to the top seed by almost three quarters of a second in 49.15. If his 50 back was any indication, the meet, European and potentially Coleman Stewart’s World Record could be on alert tomorrow night. Romania’s Robert Glinta finished 2nd in Kolesnikov’s semi and qualified second overall heading into the finals.

Greece’s Apostolos Christou won the first semi-final and became the first Greek man ever under 50 seconds in the 100 back to qualify 3rd with a new national record of 49.98. We should be in for a tight race for the silver and bronze behind Kolesnikov tomorrow night, as the 2nd to 6th seeds were all within 3 tenths of one another.

The women’s 100 IM is officially the upset of the night, with Poland’s Alicja Tchorz, who qualified 6th into the final and swam out of lane 7, shocked the field for an upset win and a new Polish national record of 57.82. She outtouched Russia’s Maria Kameneva, who also claimed the bronze in the 50 free last night, by the slimmest of margins, with Kameneva settling for sliver in 57.83.

Sarah Sjostrom collected a disappointing bronze medal, touching in 58.05 and over a tenth slower than her semi-final time. This 100 IM race came just 30 minutes after getting out of the water from the 100 free semi-final, so it is likely that she felt some significant fatigue from the tight turnaround. The Netherlands’ Marrit Steenbergen, who finished off the podium in fourth, was in a similar boat to Sjostrom having just swum the 100 free semis. Steenbergen had qualified 2nd out of the semifinals.

In a battle of two of the world’s distance titans, German Florian Wellbrock topped Italian Gregoria Paltrinieri 14:09.88 to 14:13.07. Wellbrock’s swim marks a new German record and came close to Paltrinieri’s World Record of 14:08.06 and clocks in as the fourth fastest swim (3rd fastest performer) in history.

The two swam nearly stroke for stroke for the first half of the race, before Wellbrock began to consistently outsplit Paltirnieri around the 900 meter mark. Wellbrock had plenty left in the tank for the final 100 despite making his move around the halfway point, where he split 54.72.

Coming in for the bronze in 14:26.24 was Wellbrock’s countrymate Sven Schwarz, who mounted a comeback over Russia’s Kirill Martynychev and France’s Joly Damien over the race’s final 500 meters.

The Russian breaststroke group flexed its muscle tonight in the 200 breast semi-final, with current World Junior Record holder Evgeniia Chikunova taking the top seed after winning the second semi in 2:18.08. That swim clocks in about a half second off of the 16 year-old’s best time from the ISL Napoli stop in September where she set the WJR.

Countrymate Maria Temnikova easily won the first semi, touching in 2:19.20 to win by almost two full seconds. The Russians will hold the top two spots heading into tonight’s final and will look to sweep the event. Finishing in 2nd in the first semi was Lithuanian teenager Kotryna Teterevkova, who posted a lifetime best by over a full second, undercutting her swim from September’s ISL meet.

Czech veteran Kristyna Horska appears to be set up for a tight battle with Italy’s Francesca Fangio for the bronze tomorrow night. Horska qualified third in 2:20.04, while Fangio was 4th just .05 behind.

After a dissapointing 100 fly last night, Hungary’s Kristof Milak has established himself as the gold medal favorite in his signature event, the 200 fly. Milak coasted to victory in the first semi-final, touching the wall in 1:51.33, nearly 2 full seconds ahead of Poland’s Krzysztof Chmielewski who will head into tomorrow’s final with the 5th seed.

Bulgaria’s Antani Ivanov, who also swims in the NCAA for Virginia Tech, will be Milak’s primary challenger tomorrow night. Ivanov won the 2nd semi in 1:51.89 to qualify him 2nd for the final. The top four swimmers seem to have separated themselves from the pack, with Russia’s Egor Pavlov and Italy’s Alberto Razzetti stopping the clock with a pair of 1:52 low’s.

Analia Pigree of France will be the surprise top seed heading into tomorrow’s 50 back final. She won the 2nd semi-final in 26.05, and will be seeded just ahead of current World Record holder Kira Toussaint, who won the first semi in 26.07.

The Dutch will be looking to add two medals to their haul in the event, as Maaike De Waard will head into the final with the third seed with a 26.10 after finishing just behind Pigree in the second semi.

Italy will also have two swimmers in the final with Elena Di Liddo and Silvia Scalia finishing 4th and 5th out of the semis, respectively.

In a thrilling final of the men’s 100 breast, it was Italian Nicolo Martinenghi, not the current World Record holder Ilya Shymanovich, who took the gold in 55.63. Martinienghi, who seemed primed to be take the world by storm when he set the current WJR at 57.27 in 2017, has been comparatively quiet in his senior international career until the last several months, where he took the bronze medal at both the LC Euros in May and the Olympic Games August.  Martinenghi has continued his hot streak at the SC Euros, after posting the fastest 50 breast split in history last night on Italy’s World Record breaking 4×50 medley relay. The swim also smashes the Italian national record and makes Martinenghi the 4th fastest performer of all time.

Shymanovich, the defending champ and World Record holder, settled for the silver despite leading at the turn after a 25.95 opening split. The Netherlands’ Arno Kamminga charged home hard to take the bronze, posting a second 50 split of 29.31, easily the fastest in the field. That second 50 split should bode well for Kamminga’s 200 breast later on in the meet.

The host nation of Russia avenged their loss in the men’s 4×50 medley relay yesterday by claiming the gold in the women’s version, touching first in 1:44.19. The Russians were led by Arina Surkova’s fly split of 24.49, the fastest in the field.

Sweden very nearly ran down the Russians for the win, as Sarah Sjostrom outsplit Russian anchor Daria Kleplikova by nearly a full second. Sjostrom’s 22.94 split was the fastest in the field.

The Italians staged a comeback to touch in third for the bronze, as Silvia di Pietro ran down the Netherlands’ Valerie Van Roon, 23.54 to 23.99. The Netherlands had an early lead thanks to backstroker Kira Toussaint splitting 25.91, but were unable to hold the lead after a weak breaststroke leg from Kim Busch brought them back to the field.