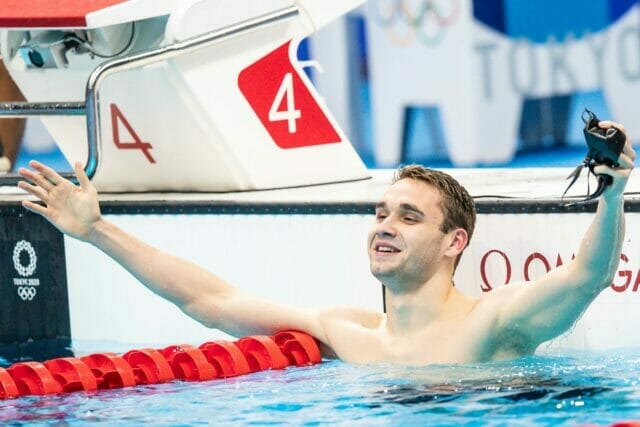 Swedish speedster Sarah Sjostrom will look to lock down the title in the 50 free where she has flirted with the meet record in both prelims and semi-finals. Hungarian butterfly specialist and 2020 Tokyo 200 fly gold medalist Kristof Milak will take on a final double in the 50 back and the 100 fly. In the 50 back, Milak will go head to head with Russian top seed Kliment Kolesnikov. In the championship’s first distance final, Italian Tokyo 2020 800 free bronze medalist Simona Quadarella will look to lock up the 800 free title. It will be a battle of newcomers versus veterans in the women’s 100 breast final, where 14 year-old Estonian Eneli Jefimova and 17 year old Russian Evgeniia Chikunova will challenge the 24 year-old top seed Arianna Castiglioni for the crown.

An interesting storyline to watch in the men’s 100 breast semi-finals is a number of big names swimming in the outside lanes after barely scraping into the semis. Former NCAA breaststroke stars Anton McKee of Iceland and Peter John Stevens of Slovenia finished 14th and 13th in the prelims and will compete in lane 1 of each semi-final, while German 200 specialist Marco Koch slid into the semis after qualifying 16th and will be in lane 8 of the first semi.

Sarah Sjostrom started off tonight’s finals session with some fireworks, smashing her own meet record in the 50 free from 2017 with a 23.12, though is just off her personal best of 23.00 from the 2017 Berlin World Cup stop. The Swedish star seems to be back in top form after breaking her elbow last spring in the leadup to the Tokyo Games.

Poland’s Kasia Wasick touched second for the silver in 23.49, just off her own Polish record that she set in last night’s semi-finals. Russia’s Maria Kameneva, the defending champion from 2019, finished in third in 23.72, just ahead of countrymate Arina Surkova who finished fourth in 23.93.

The gold medal favorite Kliment Kolesnikov made it a second meet record in a row to start the evening, slashing another tenth off his own record from last night. The swim marks another new best time for the Russian, whose prior best coming into the meet was 22.64 from the 2019 SC Euros in Glasgow. The swim also makes Kolesnikov the 2nd-fastest performer of all-time, behind only World Record Holder Florent Manadou.

Italian Michele Lamberti impressed by snagging the silver in 22.65, which makes him the second fastest SC Euros performer. Romanian Robert Glinta was a bit of a surprise bronze medalist, sneaking in for third from lane 7 after qualifying 6th after last night’s semis.

Italian veteran Martina Carraro won the battle of youth versus experience in the women’s 100 breast, with the 28 year-old taking the gold in 1:04.01. The swim cuts a tenth off of Carraro’s previous best, which came in the London leg of the 2019 ISL season.

Leading at the halfway point, however, was the 14 year-old Estonian phenom Eneli Jefimova, who went out in a blistering 30.24, just ahead of Carraro. As Jefimova faded down the stretch, 16 year-old Russian Evgeniia Chikunova surged to tie Jefimova for the silver. Chikunova had the field’s fastest 2nd 50 split in 33.53.

The swim was a new Estonian record for the Jefimova and the first medal for Estonia at the SC Euros since 2012 when siblings Triin and Martti Aljand combined to win three medals.

The men’s 50 free final is setting up for a massive showdown tomorrow night, as the top 6 seeds will all enter the final within 2 tenths of one another. Hungary’s Szebasztian Szabo will take the top seed after winning the 2nd semifinal in 20.87. Two-time defending champion Vlad Morozov from Russia won the first semifinal in 20.98 and will head into the final as the third seed.

Lorenzo Zazzeri, who posted a massive swim this morning with a 20.92 personal best, finished third in the 2nd semi-final and qualified sixth for the final tomorrow night. Including Zazzeri’s prelim swim, four men swam between 20.87 and 20.98 on the day.

Russia’s Svetlana Chimrova will head into tomorrow night’s 200 fly final as the clear gold medal favorite after winning the second semifinal by over a second and a half and posting the overall top time by over a half second. Winning the first semifinal was Denmark’s Helena Rosendahl Bach, who used a swift final 50 to overtake Italy’s Ilaria Bianchi, who qualified third for tomorrow’s final.

The fourth place qualifier is Lana Pudar from non-traditioanl power Bosnia and Herzegovina. Pudar will be the country’s first finalist at these championships.

In perhaps the first real upset of the meet, it was another Hungarian, Szebasztian Szabo, not Kristof Milak, who takes home the gold in the men’s 100 fly. Szabo’s gold is even more impressive considering he had posted the top qualifying time in the 50 free just minutes before.

Not only did the favored Milak not win the gold, but the Olympic silver medalist in the event missed the podium entirely. Claiming his second silver medal of the night was Italian Michele Lamberti, who finished runner-up to Kliment Kolesnikov in the 50 back. The silver continues what has been a breakout meet for Lamberti, who has won two medals in his first international meet for Italy.

Coming in for the bronze, just .02 ahead of Milak was Poland’s Jakub Majerski. Majerski had the field’s fastest opening split, going out in a blistering 22.79.

Milak finished in fourth in 49.88, just two hundreths off the podium. Milak’s gamble to add a new event to his lineup seems to have not paid off, as he finished 8th in the 50 back final and the fatigue of having two races within 30 minutes of one another seemingly kept him off the podium in an event that he was favored to win.

Turkey’s Uemitcan Gueres, who also swims in the NCAA for Harvard, finished just .01 behind Milak in 49.89.

Russia’s Anastasia Kirpichnikova was dominant in the 800 final, taking the lead at the 50 and never looking back to take the gold by almost 6 seconds. Kirpichnikova flipped first at the halfway point in 4:00.62, over three seconds ahead of Quadarella and she expanded her lead by another two seconds over the race’s back half. Kirpichnikova’s swim marks a new Russian national record and clocks her in at 7th all-time in the event.

Italy’s Simona Quadarella and Germany’s Isabel Gose had a tight battle for the silver, with Quadarella gaining the edge at the touch to take the silver in 8:10.54, while Gose settled for bronze in 8:10.60. Gose outsplit Quadarella by .26 over the final 50 meters, but it was not enough to make up the gap.

Ilya Shymanovich blasted a new SC Euros record to take the second semifinal in the 100 breast and nearly took down his own World Record in the process. Shymanovich went out in a very fast 25.89 to take the lead at the turn and although he faded a little down the stretch, his early lead was insurmountable.

Finishing in 2nd in his semifinal was Dutchman Arno Kamminga, who used the field’s fastest 2nd 50 to qualify 2nd overall in 55.82. That time equals Kamminga’s lifetime best and Dutch record set just last week at the FINA World Cup in Kazan. Turkey’s Emre Sakci qualified third overall and also swam in the very quick 2nd semi, which had five wualifiers advance to the final.

The Netherlands’ Kira Toussaint will head into tomorrow’s final as the top seed in the 200 back, after winning the 2nd semifinal in 2:03.90. Toussaint, who competed in the NCAA for the University of Tennessee, has been one of the top sprint backstrokers in the world for years, but has recently sought to add the 200 back to her arsenal. Her lifetime best stands at 2:02.09 from last month’s FINA World Cup in Budapest, so it seems as though she will have more in the tank for tomorrow night’s final.

Italy’s Margherita Panziera handily won the first semi in 2:04.53, using a quick front half to dominate her heat. Five swimmers from the second semi-final qualified for tomorrow night’s final, with Katalin Burian finishing fifth in the semi but sneaking into 8th place for the final.

Sweden’s Sarah Sjostrom was dominant in her second race of the night, winning the second semi-final by a half second in 57.92. That time is off of her lifetime best of 57.10 set over four years ago at the FINA World Cup in Moscow. The second and third qualifiers for tomorrow’s final, Marrit Steenbergen of The Netherlands and Switzerland’s Maria Ugolkova, also swam in Sjostrom’s semi-final, finishing 2nd and 3rd respectively.

Belarus’ Anastasia Shurdai won the first semifinal in 58.56, just ahead of Russia’s Maria Kameneva, who finished 2nd in 58.59. Shurdai will head to the final with the fourth seed, while Kamaneva, who won bronze in the 50 free earlier tonight, will take the 5th seed into the final.

The Italian men’s relay of Michele Lamberti (22.62), Nicolo Martinenghi (25.14), Marco Orsi (22.17) and Lorenzo Zazzeri (20.21) broke every record on the books en route to winning the gold medal in 4×50 medley relay in 1:30.14. The quartet defeated the reigning European champions and former world record holding team from Russia, who took the silver in 1:30.79. The Netherlands touched in a distant third in 1:32.16 to take the bronze.

The Russian men took an early lead with 50 back champion Kliment Kolesnikov splitting a 22.58, though Italy’s Nicolo Matinenghi put up a blistering 25.14 breaststroke split, the fastest official 50 breaststroke split in history, to put the Italians ahead for good. Sealing the win for Italy was Lorenzo Zazzeri’s 20.21 anchor, which was faster than his split yesterday on the 4×50 free relay and now puts him with the 7th fastest split (5th fastest performer) in history.