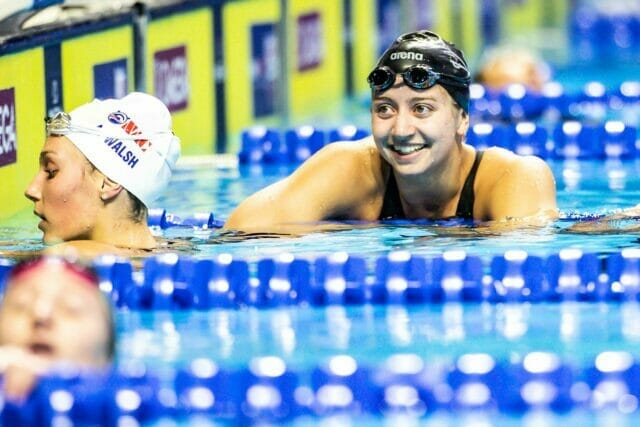 As we saw with our men’s rankings, the majority of the top teams for the women maintain their places from last month. With mid-season invites beginning this week, we’ll get our first glimpse into what these teams look like with some semblances of rest, though that will vary from school to school.

SwimSwam’s Power Rankings are the average of ballots from a panel of our top college swimming reporters. While this should help readers glean which teams are consensus picks at their rank and where in the order things get fuzzy and more subjective, bear in mind that these rankings are not an opportunity to personally attack any specific writer.

Have been going up against stiff competition, but they’ve got to be encouraged by the early-season performances from freshman Ellie Waldrep. -JS

Intrigued at what Emma Nordin will drop at the Wolfpack Invite. -JS

Delaney Schnell will be a key for the team come NCAAs. Nice rebound win over UCLA one day after falling to USC. -JS

Diving remains the driving force behind Purdue’s spot in the rankings. -JS

Emma Atkinson ranking as one of the fastest in the NCAA with her 1:54.7 200 back at the end of October. -JS

Hold their spot after dominating TCU, as expected. -JS

Haven’t raced in almost a month, but Hannah Brunzell was a top performer in that meet against Illinois and Illinois-Chicago. -JS

Sarah Thompson is one of the fastest swimmers in the country this season across the 50 free, 100 back and 100 fly. -JS

You can never have too many sprint free pieces and Sophie Fiske looks like a useful addition. Wisconsin’s relays are marginal to score so a few small improvements can add up to large points gains there. -AM

USC always seems to rest for their early-season USC invite, so their #3 Swimulator ranking is a mirage. However, there is little doubt that this is a much-improved team from last year. -AM

Relays will be a critical spot for improvement for this team moving into the postseason. -JS

Talia Bates led the charge in that big win over Georgia at the end of October. -JS

Gave Tennessee a good challenge in their dual two weeks ago. Gaines, Brooks and Sorenson all look solid. -JS

The Cards are a victim of circumstance a little bit, with their Notre Dame/Miami meet on November 5 getting cancelled, so we haven’t seen them in action since falling to Tennessee a month ago. -JS

The Buckeyes cruised to big wins over Arkon and Denison last weekend, but the majority of last season’s NCAA team remains intact and has proven it can peak at the right time. -JS

Tough six-point loss to Florida at the end of October, but rebounded with a strong showing against Auburn. Zoie Hartman swimming well. -JS

Avery Wiseman might be the answer to the breaststroke problem their medleys had last year. If so, they have to potential for multiple top 5 relay finishes. -AM

Mona McSharry hitting 59/2:09 breaststrokes early in the season is a great sign. Big win for the team against Kentucky. -JS

I jumped Michigan ahead of Texas in my latest rankings. Both teams had really good meets lately, but the Michigan freshmen answered a lot of questions about their depth and relays for me. -BK

The Bears haven’t had to face a true challenge since UVA visited in mid-October, but Ivey and Stadden appear to be swimming well. -JS

The Texas women stepped up and performed very well despite facing an impossible challenge in UVA last week. -JS

Katharine Berkoff and Sophie Hansson are showing no signs of slowing down after winning national titles last season. -JS

Stanford has been far from sharp in their two meets so far, but this is still a team that can roll out a relay where every member has an Olympic medal. -AM

The reigning champs placed first in 15 of 19 races against Texas and are the clear favorites to repeat come March. -JS