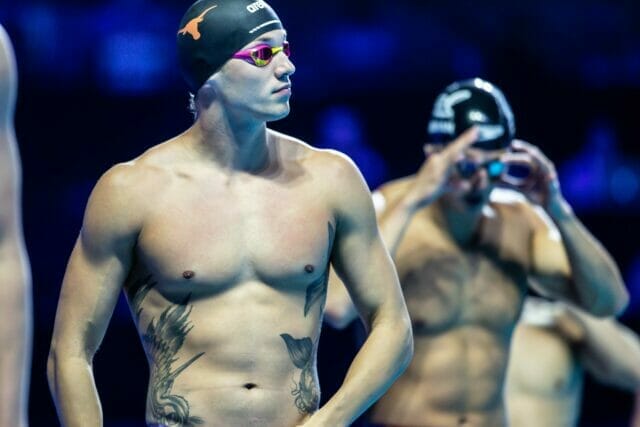 The NCAA season is in full swing and we’ve got our first edition of the men’s power rankings.

While we’re in the final stages of our 2021-2022 College Swimming Previews, taking a deep dive into the top 12 teams from last season’s NCAA Championships, the first edition of our power rankings are a more up-to-date look at how we rank the top 20 programs nationally in the “preseason”—primarily based on roster outlook for the season, but a little weight based on how teams have swum thus far.

While Max McHugh is still on the team, Minnesota will grab decent points at nationals. -AM

The case for Florida State this high is all about their relays. They return 19/20 of their relay legs and scored 30 relay points last year. -AM

Brooks Curry is very much the straw that stirs LSU’s drink, and given his early-season swims, he’s setting up for a massive year. Getting a 5th year out of diver Juan Celaya-Hernandez means the Tigers return their two big guns from last season. Not a ton of upside here, but a new coach in Rick Bishop and some new energy should do the Tigers good. -JS

A pair of international recruits could have NCAA scoring potential, and I’m pretty bullish on Batur Unlu taking the next step as a sophomore. -JS

The team has a lot of breaststroke and diving ability. Kayky Mota and Seth Bailey will be crucial to their success outside of those areas. -JS

Brooks Fail is back, which is huge, but the David Schlicht loss is pretty brutal. -JS

It wasn’t just the departure of Shaine Casas, but the Aggies also lose Mark Theall and Tanner Olson. All three were relay fixtures, and Casas scored 60 individual points last season. The team will need to step up and collectively contribute. -JS

Danny Kovac, Jack Dahlgren and Ben Patton looking great early on. The team very much lives and dies by the performances of those three come NCAAs. -JS

Back after a year off, with multi-time NCAA champion Dean Farris leading the charge.

The fifth-ranked recruiting class lessens the blow of losing Matt King. They could rise or fall depending on how their international freshmen transition to yards. -JS

A sneaky-good roster that is flying under the radar given they haven’t competed in 20 months or so. Snagging David Schlicht from Arizona will pay dividends. -JS

Losing Gus Borges stings, but the Wolverines brought in solid reinforcements including transfer Nik Eberly who can fill that relay void. Patrick Callan and Jake Mitchell come back after making the Olympic team, and Wyatt Davis and Will Chan started strong at the SMU Classic. -JS

Stanford had 11 finishes last year by returning athletes that placed between 17th and 24th at nationals, the most of any team. That plus their elite addition of Minakov gives them a high ceiling. -AM

I went back and forth on Virginia and Virginia Tech at #8 and #9. While Virginia has a better incoming freshman class, something as simple as Youssef Ramadan not getting DQ’ed at NCAAs would make a huge impact for the Hokies. -BK

Bringing in Matt King is going to make those already-strong relays even more lethal. They don’t yet have enough surefire A-final types to make the jump to the next tier, and the increased depth across the NCAA this year could make things even tighter, but they’re trending in the right direction. -RG

Hunter Armstrong scored 4 points at NCAA’s last year. He also made the Olympic team this summer. It feels safe to assume he’ll score quite a few more this year. -AM

Georgia’s rankings is predicated on Matt Sates arriving on campus in the spring, and being as good in short course yards as we’ve seen him in short course meters. They’re still a top 10 team without him, but he is the backbone of their top 5 chances. -BK

In our preview, we suggested that NC State could be putting together the pieces for a run at a top-two finish. That still feels a year or two off, but if the deep freshman class can click immediately, the Wolfpack should certainly be in the hunt for third this year. -RG

Indiana is returning all of their NCAA qualifiers from last year, and they’ve added potential star power with freshmen Josh Matheny, Luke Barr, and Rafael Miroslaw. It also should be noted that IU came in 6th at NCAAs last year without Bruno Blaskovic, their top sprinter. Blaskovic likely would have accounted for 25-30 points individually and would have made a significant difference in the Hoosiers’ relays. Andrew Capobianco continues to pose a massive scoring threat in diving, and IU pulled in freshman Quinn Henninger, who was an Olympic Trials finalist this past summer. -SP

Louisville returns essentially everyone from last year, and they’ve added a brace of Olympians who’ve been 1:46 in the 200 free (LCM). It feels like NCAAs may be even more cutthroat this season, but the Cardinals should be in the thick of the “Not Cal or Texas But Really Really Good” tier once again. -RG

It’s not just the really big stars that have me feeling good about Florida at #3. It’s what we saw last year from guys like Dillon Hillis and Eric Friese. -RG

Cal had an all-time great NCAA performance last season — and finished 2nd. They’re bringing back a few more 5th-year swimmer points than Texas, and Liam Bell is already looking to be in great form, providing additional breaststroke depth. With five months until NCAAs, there’s every indication that this will be yet another great Cal vs. Texas slugfest come March. -RG

No doubt – the defending champions lost of ton of senior points and experience. However, there are a few things in Texas’ favor. 1 – Returning fifth year Alvin Jiang and grad transfer Cameron Auchinachie will help stabilize the relays that otherwise had holes to fill. 2 – The Jordan Windle-led dive crew will score more points than most schools competing at NCAAs. 3 – They’ve got top-ten recruits in the form of Tim Connery, Anthony Grimm, and Luke Hobson. 4 – You’ve to figure that a few of the ten guys who got left home after qualifying for NCAAs will be able to score. 5. They still bring back 282 individual non-senior points on top of everything else we just said. -RG