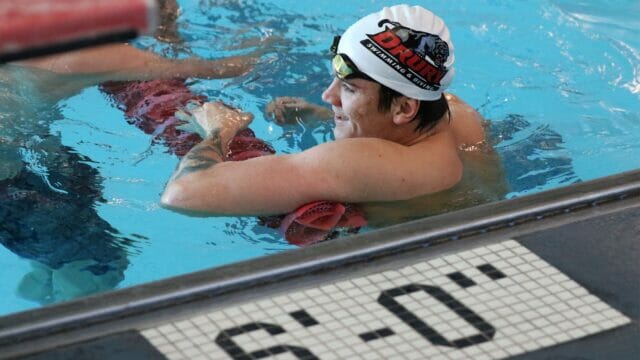 Last season, at the NCAA Division II National Championship meet, Ostrowski became the first college swimmer from outside of Division I to go under 19 seconds in the 50 yard freestyle.

His time of 41.25 also ranked him as the #2 collegiate swimmer in the country in the 100 free, behind only Cal’s Ryan Hoffer. That makes Ostrowski the fastest-returning 100 freestyler in collegiate swimming this season, and that swim is also an NCAA DII record.

And that was as just a freshman.

Ostrowski is from Strachoci, Poland and represented his country as the leadoff leg of the 400 free relay at the Tokyo 2020 Olympic Games. He split 48.67 and the team finished 11th in a new National Record.

Last year was his first year of college swimming. While Drury lists him as a sophomore this season, Division II and Division I have different eligibility rules – so if he winds up in Division I, at 22 years old, there’s no guarantee that he would get 4 more years (including the COVID-19 waiver year) of eligibility.

This is also part of an exodus of Division II talent. McKendree’s Fabio Dalu, who was the NCAA D2 Swimmer of the Year last season ahead of Ostrowski, transferred to Ohio State; and UIndy’s Landon Driggers, who was the 400 IM runner-up at NCAAs as a freshman, is also in the transfer portal.