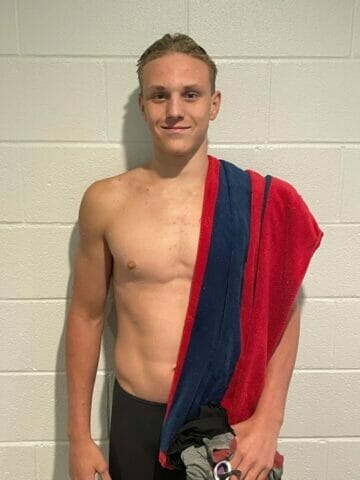 15-year-old Maximus Williamson of the North Texas Nadadores headlined a strong field at the LAC fall classic, winning 4 different events, while dropping time every time he entered the water at the meet.

In his first race, the 200 freestyle, Williamson sliced over 3 seconds off of his best time to post a blistering 1:37.09. For Williamson, his time marked a US Open cut, and currently ranks as the 8th fastest performance in history for a 15-year-old, giving him the top time in the country this season by over a second. Later, Williamson followed-up his 200 freestyle performance by winning the 100 freestyle in a personal best of 44.28. His time ranks him as the 11th fastest 15-year-old in history, leading this season’s national rankings by a half second.

Also in attendance at the meet was US National Junior Teamer Cooper Lucas from Lakeside, who posted best times in the 200 backstroke (1:49.14) and 100 freestyle (44.71). With his time in the 100 freestyle, Lucas currently ranks 4th in the country for the 15-16 age group, where the aforementioned Williamson leads the rankings. In addition, his time in the 200 backstroke ranks him 5th nationally for the 15-16 age group. In the 400 IM, the event he’s on the National Junior Team for, Lucas posted a time of 3:56.14, which ranks him 5th nationally in his age group.

On the women’s side, Team Rebel’s Madeline Hebert also climbed the national rankings. In the 200 freestyle, the 16 year-old Hebert placed 2nd overall with a time of 1:47.66, knocking 3 seconds off of her best time. Currently, her time ranks her first in the country for the 15-16 age group in that event. Hebert also dropped a time of 23.18 to win the 50 freestyle, cutting almost a second off of her best time. With that time, Hebert ranks 7th in the country for the season.

She also dropped over a second in the 100 freestyle, posting a time of 50.36 to win the event with a time that ranks 10th nationally for her age group.

Hebert’s biggest drop of the weekend came in the 500 freestyle, where she dropped over 6 seconds off of her personal best to finish in a time of 4:52.03, which ranks 13th on the national rankings.